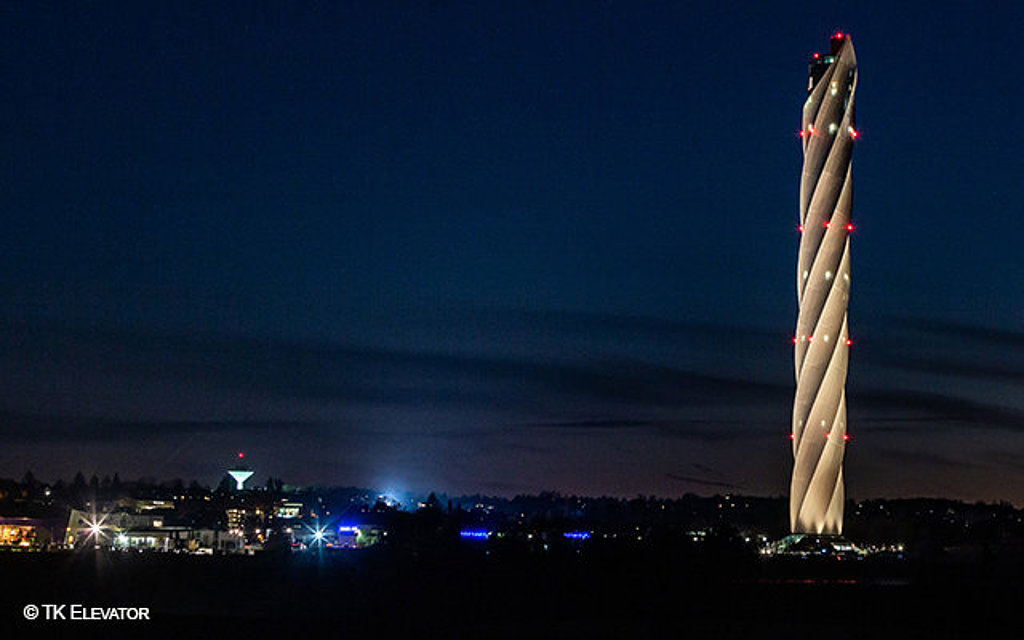 The city of Rottweil was founded by the Romans almost 2,000 years ago and is the oldest city in Baden-Württemberg. Located around 90 kilometres south of Stuttgart, nestled between the Black Forest and the Swabian Alb, the historical city is also known as the“City of Towers”. This renown is impressively reinforced by thyssenkrupp. With the new test tower, an imposing and innovative landmark was created.

With an investment of over 40 million euros for the test tower, Rottweil forms – together with the elevator plant in Neuhausen auf den Fildern (close to Stuttgart) – a highly modern innovation hotbed for elevator technology.

The tower represents an important pillar for thyssenkrupp. It serves to test and certify elevator innovations and contributes to a considerable shortening of development times for future skyscrapers and for those currently being constructed.

With twelve shafts and speeds of up to 18 metres/sec., the tower offers possibilities that were never before available. In three shafts, the new revolutionary MULTI elevator is being tested. It is revolutionary because it has no cable and canalso travel sideways (!).

With a height of 246 metres, the tower is one of the most impressive and also most breathtaking constructions in southern Germany. The test tower symbolizes the engineering skill of thyssenkrupp – and it also represents a symbol for the city of Rottweil and complements the historical church and defensive towers from the middle ages.

The visitor platform, at a height of 232 metres, is the highest publicly accessible platform in Germany and offers a panoramic view over the Black Forest and the Swabian Alb and beyond. But not only the viewis breathtaking.

The ride with the elevator is an experience in itself, as visitors reach the dizzying height of the platform within just 30 seconds.

The tower represents an attraction for tourists and also for companies – within a very short period of time, it has advanced to become both a landmark and a magnet for visitors.

Despite its imposing height, the tower’s appearance is still light and delicate. The architects, Dr. Werner Sobek with Helmut Jahn, covered the concrete shaft with a covering made of glass fibre fabric.

The fabric is closely meshed at the foot of the tower and shows increasingly more of the tower towards the top. It reflects the light in various ways at different times of day and during different seasons of the year. As a result, the tower changes its appearance depending on the weather.

The tower is perfectly staged by a total of 44 spotlights (Powershine RGBW model) from our Italian sister company and specialist for architectural lighting solutions GRIVEN. For the desired ring-shaped lighting, the spotlights were arranged in two circles.

A total of 24 Powershine spotlights (yellow dots) form an inner circle and illuminate the lower part of the tower. To ideally cover this area, spotlights with “wide optics” were selected. Specially manufactured supports from Hess ensure that the spotlights are stable and are installed higher than the grass.

The outer ring, with 20 Powershine spotlights (red dots) with “medium optics”, is responsible for the illumination of the upper half of the tower. Here great importance was placed upon the light visibly dimming towards the top of the tower, in order to lend the tower a visual lightness also in the evening and night hours.

For these spotlights, special housing for their accommodation was developed. In colour DB 703, the housings discreetly blend into the area surrounding the tower.

The maximum power per spotlight is 281 watts. In addition to the desired standard colour, the spotlights in the RGBW variant can shine in any colour. Further atmospheric scenarios and “Wow effects” can be created as desired.

Another special feature: The lighting system was equipped with a fog sensor that is connected to the “Wall TSC”, acolour change controller with 1024 channels and digital inputs.

By means of a threshold value switch created in-houseby Hess, it is ensured that in the case of fog with visibility under 100 metres, the lighting is switched off and the effect of an illuminated “haze dome” is avoided. Another clever and innovative piece of equipment – just the right feature for an extraordinary tower.

We talked to Mr. Gremer, one of the two managing directors of L-Plan, about the essential work that had to be done concerning the lighting well before the tower was constructed.

Mr. Germer, what were the first steps that you took in this project?
The lighting of the tower has a long history indeed. The requirements for façade lighting were already part of an environmental report drawn up in 2014, which was part of the justification for the development plan. For this purpose, we prepared a corresponding assessment in which important topics such as luminance, scattered light, insectfriendliness and on/off times, depending on the season, were addressed and evaluated.

What was the decisive factor in this decision?
In the course of an on-site sampling, it became apparent that the sculptural quality and the spiral-like façade spiralling towards the sky can only be effectively staged by illuminating the shell from the outside, i.e. from the ground. The visual effect of the convex-concave silhouette would have gone lost when using another form of illumination. I think the result speaks for itself: An incredibly beautiful appearance at night – while adhering to the economic and ecological framework conditions.

L-PLAN LIGHTING DESIGN is an independent lighting design consultancy based in Berlin. The consultancy was founded in 1998 by Michael Rohde.

L-PLAN stands for creative, high-quality and sustainable lighting design and for many years of project experience, in particular for artificial lighting and daylight planning, lighting master planning, luminaire development and event lighting as well as light installations.

L-PLAN works interdisciplinarily and brings together knowledge and expertise from the fields of architecture, interior design, product design and electrical engineering.

Further information on L-PLAN can be found at: www.l-plan.de 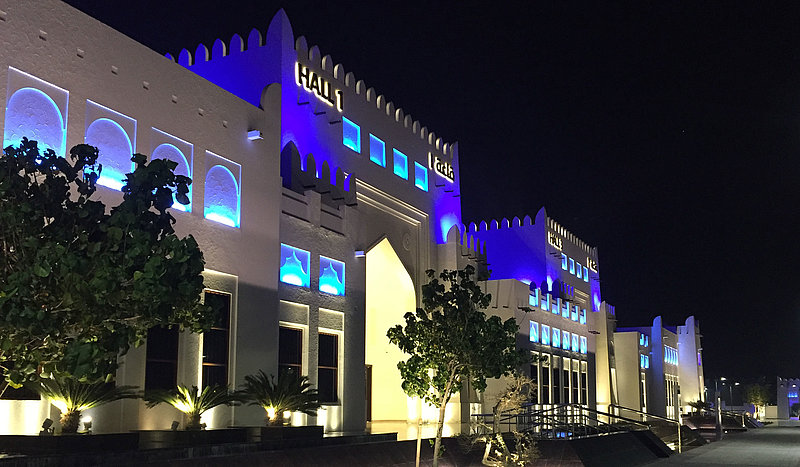 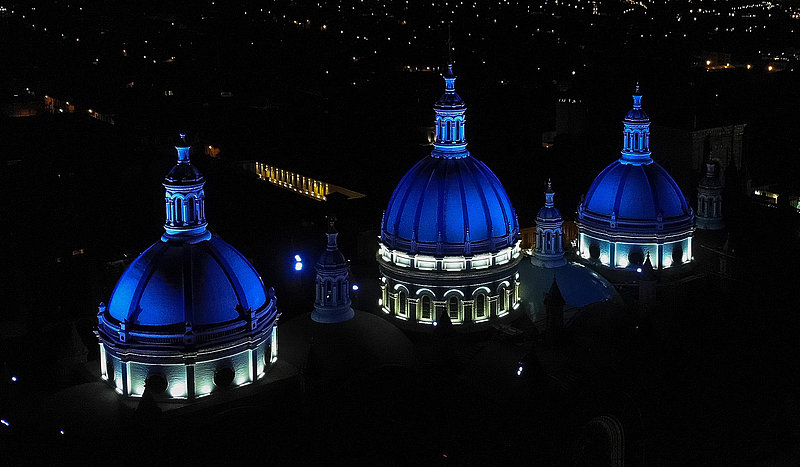 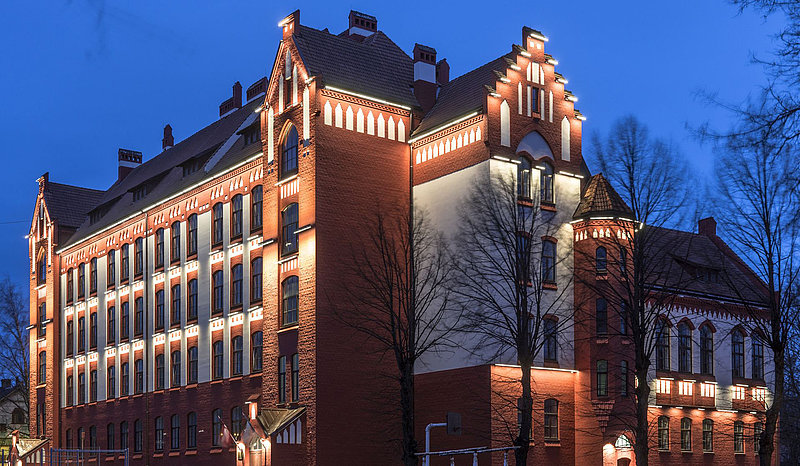 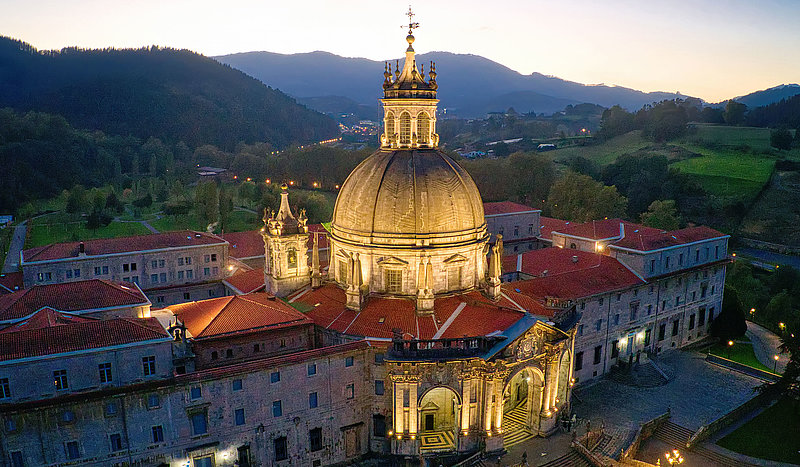