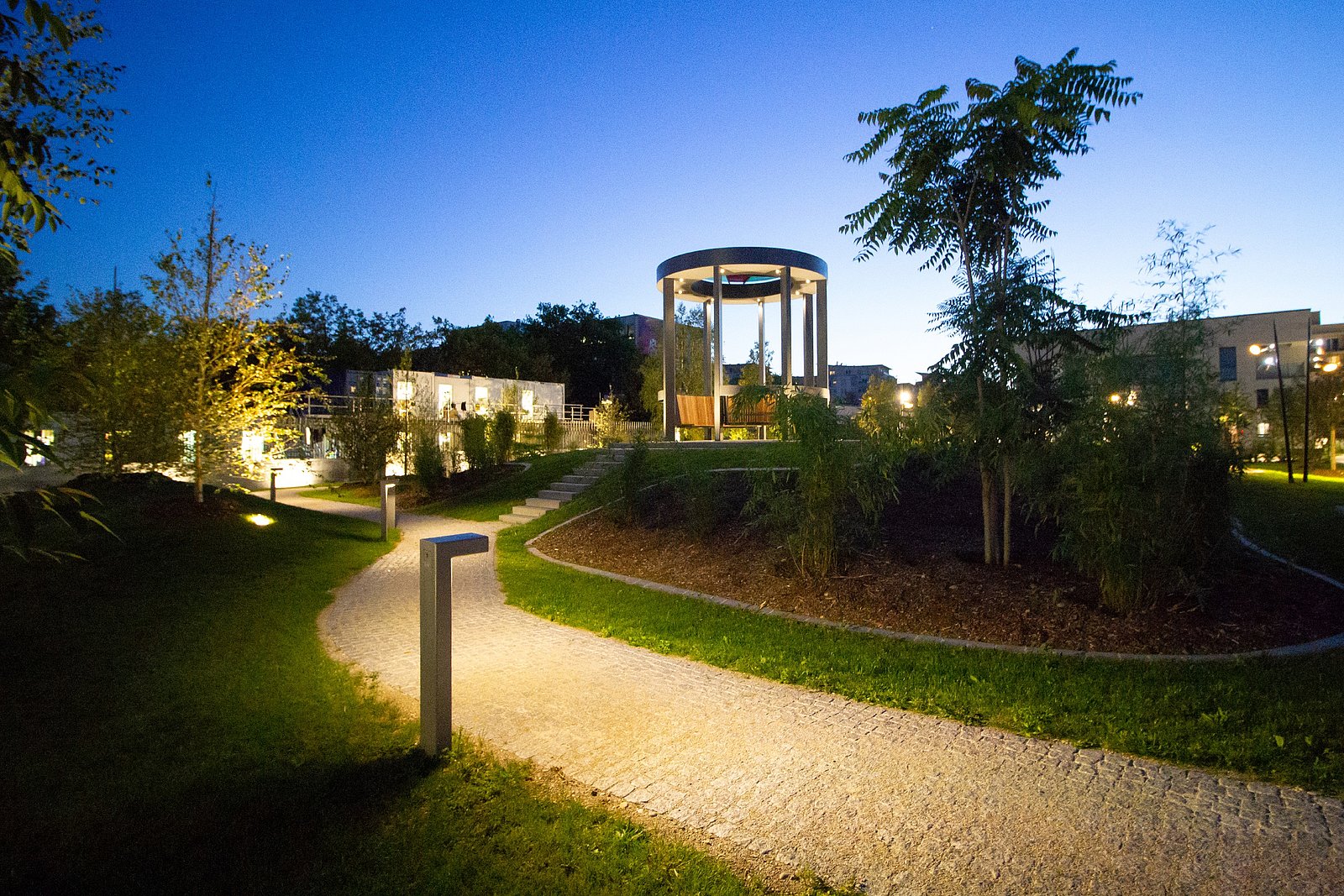 A little bit of China in the middle of Munich

The new domicile of the Chinese Consulate General in Munich is more than impressive in many respects: The prestigious building complex in the district of Obersendling houses the largest consulate general of the People’s Republic of China in Europe.

Consulate visitors are greeted by an extremely impressive reception area, and employees enjoy an attractively designed working and living environment. The open-space design with Asian influence goes hand-in-hand with a sophisticated lighting concept with special decorative, functional and safety-relevant requirements. The selected luminaires by Hess and the installed spotlights by Hess sister company GRIVEN more than meet these high standards in every respect.

Approximately two years after the groundbreaking ceremony, the Consulate General of the People’s Republic of China opened the doors of its new Munich location at Hofmannstrasse 57 in September 2018.

Designed, in cooperation with the Munich planning office Obermeyer, according to a Chinese preliminary design of Tongji University Shanghai, the diplomatic representation of the People’s Republic presents itself to the Free State of Bavaria as a spacious complex in the middle of the city.

In addition to modern service buildings, the campus has a secluded, private area hidden from view in the inner courtyard.

Only embassy employees who live on the premises have access to it, where they find numerous leisure and recreational features with plenty of convenient amenities and a welcoming ambience. 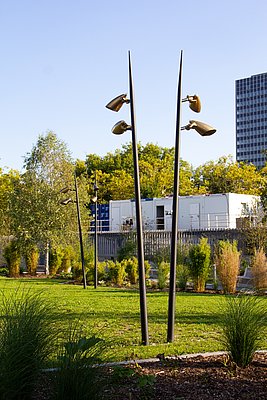 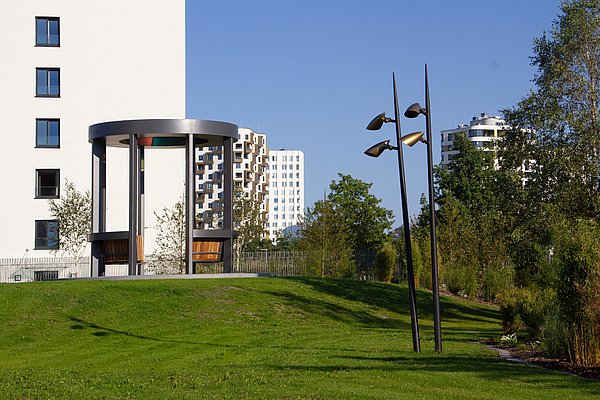 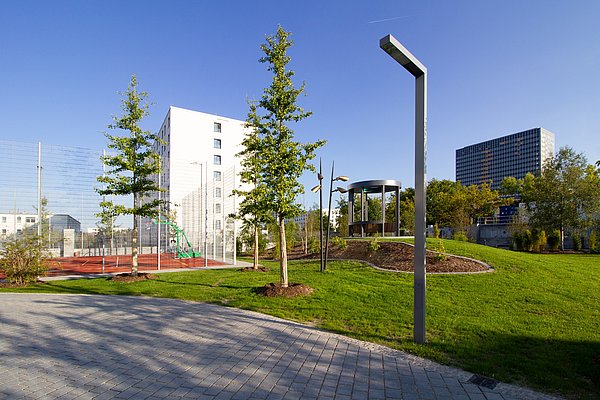 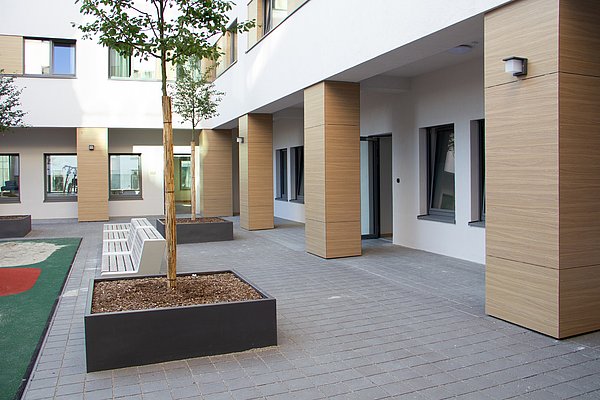 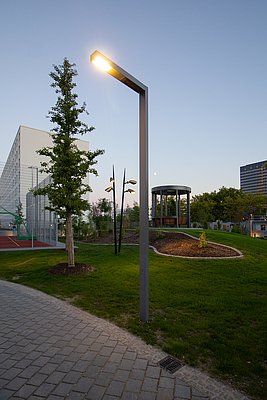 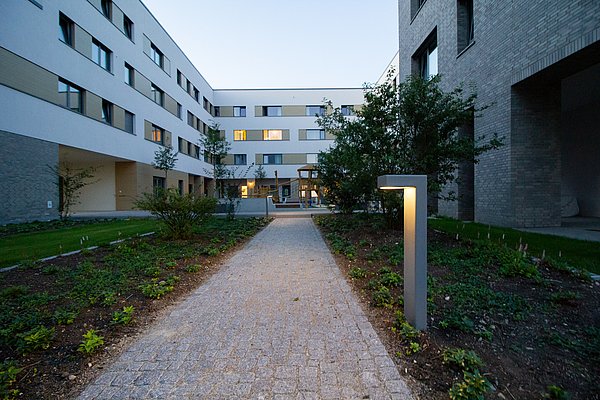 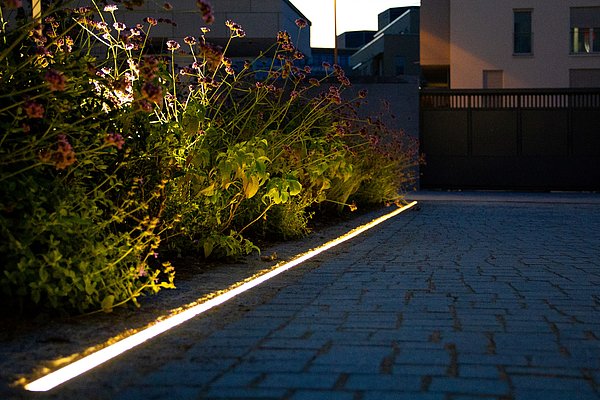 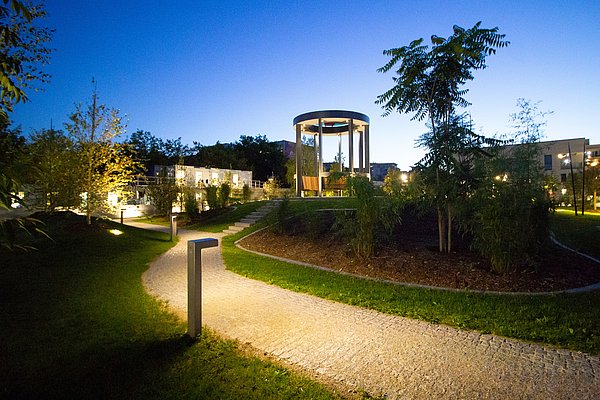 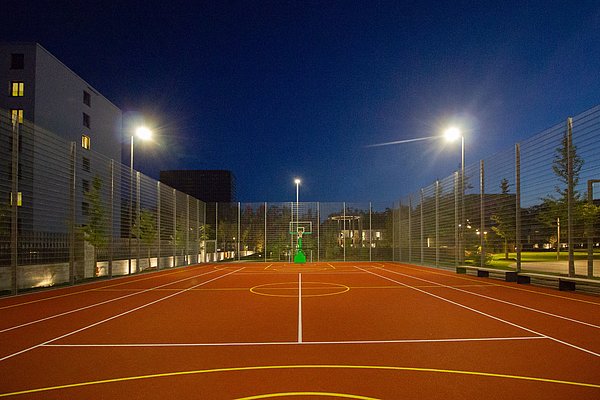 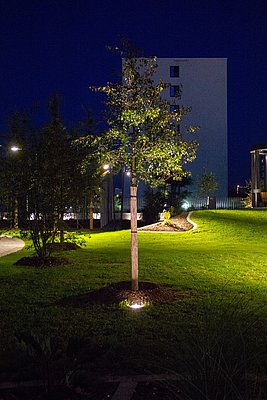 A symbiosis of prestige and atmosphere

For this open space, landscape architect Alexander Over from Munich developed a design concept that successfully combines traditional elements of Chinese (garden) culture with the Munich location.

The design idea is expressed in landscape design that suggests Asia: The combination of 133 large trees, all of which are native to China and suited to the local climate in Southern Germany, together with a lavish bamboo garden with a pavilion, contribute to the Far Eastern staging of the grounds.

Additional play and seating areas, along with a large multipurpose sports field, were devoted to the residential area behind the central consulate building. “The trees were arranged in groups of three to seven specimens of the same species. Additional perennial areas, with a mix of more than 5000 plants comprising a total of 50 species, ensure that the grounds are in bloom almost year-round”, says Over.

As an eye-catcher at the top of a small hill in the bamboo garden, the pavilion symbolises the open-space concept. Its positioning and the outward appearance are borrowed from the Monopteros of the English Garden in Munich, while the inner, introverted structure conforms to the classic Chinese pavilion. “Modern in form and material, it symbolises the representation of a modern China in the state capital Munich”, the landscape architect explains.

The high design standards extend to the choice of materials used, which include predominantly natural materials such as granite paving, differentiated by a variety of stone formats and joint patterns, and wood for the terraces, seating and playground equipment as well as metal in a uniform, light grey tone in the style of the façade elements and the external fence. Only the pavilion and the planters stand out with their darker hue.

Design luminaires from Hess in combination with LED spotlights from GRIVEN ensure attractive presentation of the outdoor space.

The entire design is supported by a sophisticated lighting concept, which attractively presents the outdoor installation in its spatial effect and addresses features of safety, orientation and atmosphere.

The need to present a distinguished appearance and strict security requirements around the entrance had to be reconciled with functional atmospheric lighting for the private residential and leisure areas.

The luminaires all meet the needs in terms of both form and material composition for the challenging requirements of the exterior. In accordance with the overall colour concept, the Hess luminaires were specially painted in RAL 7037 Dust Grey/Silk Matt for this project.

This allows them to blend in perfectly with their surroundings during the day, while their high quality of light in the evening and at night ensures the desired lighting conditions and creates a comfortable atmosphere where desired. “The luminaires should be formally unobtrusive and catch the eye with their lighting effect, especially in the evening and night hours. The ARINI luminaire, which occupies a very exposed position, is explicitly excluded from this. With its pointed, slightly inclined poles, it is reminiscent of grass and discreetly blends with the bamboo garden”, says Over, summing up.

“The luminaires should be formally unobtrusive and catch the eye with their lighting effect, especially in the evening and night hours. The ARINI luminaire, which occupies a very exposed position, is explicitly excluded from this. With its pointed, slightly inclined poles, it is reminiscent of grass and discreetly blends with the bamboo garden”

The entrance to the consulate is dominated by security-oriented lighting implemented by the planning team with compact and powerful LED luminaires from GRIVEN. What was needed was a solution that optimally combines light optics and brightness.

PARADE S-40-R models recessed into the ground, each with 40 exceptionally bright LED units in warm white and asymmetrical wall-washer optics, provide continuous and widely visible lighting for the outer property wall and the street-side façade of the consulate building.

In contrast, JADE 16 spotlights are used for purely representative purposes, staging the Chinese national coat of arms selectively and precisely.

RUBY R spotlights, which are recessed into the ground in the entrance area in front of the wall and near the entrance gate, also increase the attractiveness of the area as wall washers.

The LEDIA illuminating strips from Hess set decorative accents at the edges of the paved entrance area. With their routing, they skilfully take up the light strips of the canopy and effectively project them onto the ground.

For the inner courtyard of the embassy, the lighting concept provides functional basic illumination of the pathways as well as attractive staging of the pavilion and vegetation.

“The façade lighting and the continuous lighting of the property wall, by in-ground luminaires for security reasons, radiates a lot of light upwards. We therefore chose the pole and bollard luminaires with a discreet expression of design for the campus also from the point of view that they emit precisely targeted light onto the desired surfaces”, says Alexander Over.

Accordingly, the rectangular luminaire housings of the LINEA luminaire family can be found on campus in the form of pole-mounted luminaires and illuminating bollards.

While the nearly 1-metre-high LINEA bollards gently illuminate the pavements, LINEA pole-mounted luminaires in single and double versions ensure homogeneous illumination of the surroundings from a height of 4.5 metres at selected locations.

In the area of the residential building, CASSINO wall-mounted luminaires ensure the necessary basic illumination of the pathways and also support the residential atmosphere.

Thanks to NOVARA S bracket-mounted luminaires with mounting heights of 8 metres, optimum lighting conditions prevail around the multipurpose sports field, allowing for late-evening basketball, tennis and football games. High lighting quality is ensured by equipping each of the luminaires with three LEVO LED modules in the light colour of 4000K.

RAVENNA in-ground spotlights are used to stage the trees and are arranged alternately in front of and behind the trees. The offset positioning creates an extremely appealing combination of light and shadow.

The pavilion at the bamboo garden is also illuminated in an atmospheric way: GRIVEN Micro-Dune spotlights installed in the lower column supports and other spotlights mounted between the supports on the pavilion vault bathe the architectural gem in pleasant light during the evening and night hours.

“The façade lighting and the continuous lighting of the property wall, by in-ground luminaires for security reasons, radiates a lot of light upwards. We therefore chose the pole and bollard luminaires with a discreet expression of design for the campus also from the point of view that they emit precisely targeted light onto the desired surfaces” 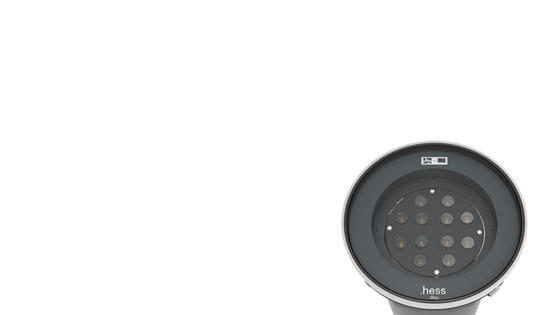 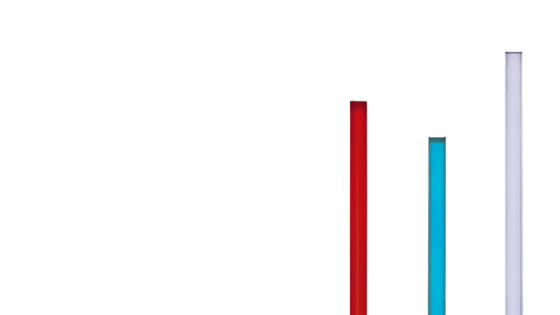 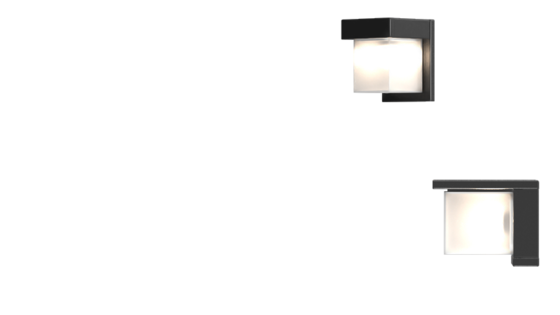 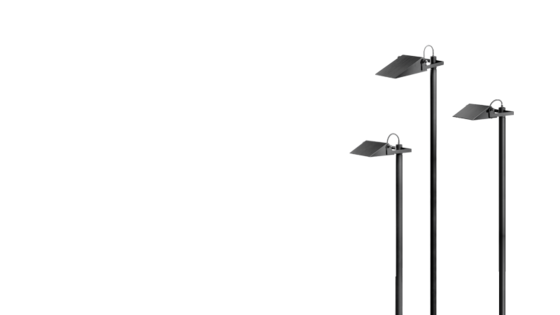 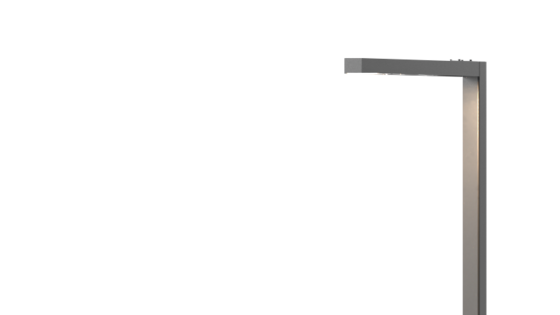 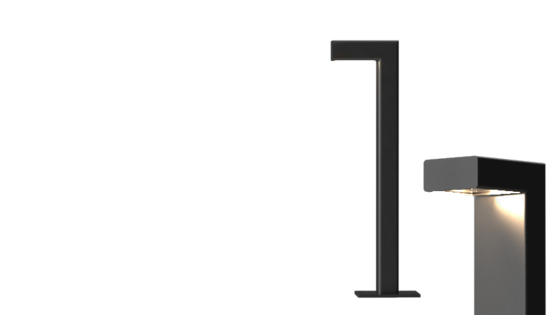 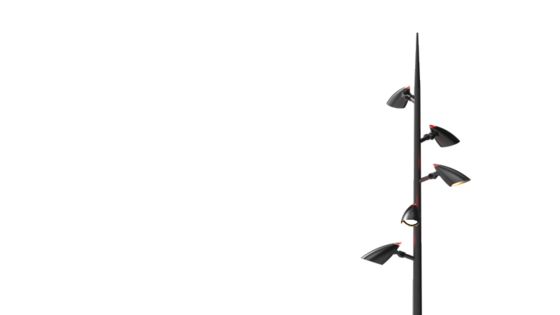 ARINI lighting system: a highlight in the bamboo garden

The ARINI luminaire near the bamboo garden definitely has a special function and position in the lighting and design concept. “The suggested floral design discreetly blends with the leitmotif of the bamboo garden and flanks the central lawn”, explains Alexander Over. In order to best accentuate the sensational ARINI, two of the six ARINI lighting systems, in the ARINI N 4° version with a height of 5.2 metres, were grouped together on the lawn, with each pole fitted with two ARINI Light+ heads.

A special feature of the luminaire heads are the discreetly illuminated end caps, which set additional accents. The horizontally and vertically adjustable luminaire heads are equipped with LED modules in rotationally symmetrical optics in the light colour 3000K and distribute the light extensively over the lawn.

In addition to their unusual design, the ARINI also set design accents with an extravagant paint finish: The Mica Black poles blend perfectly with the Pearl Gold tone of the luminaire heads (RAL 1036), which convey an impression of being premium and upscale.

All in all, a harmonious interplay of open-space and lighting design was developed and implemented for the consulate, skilfully staging the special features of the diplomatic representation and ensuring unique radiance far beyond the borders of the consulate and Munich.