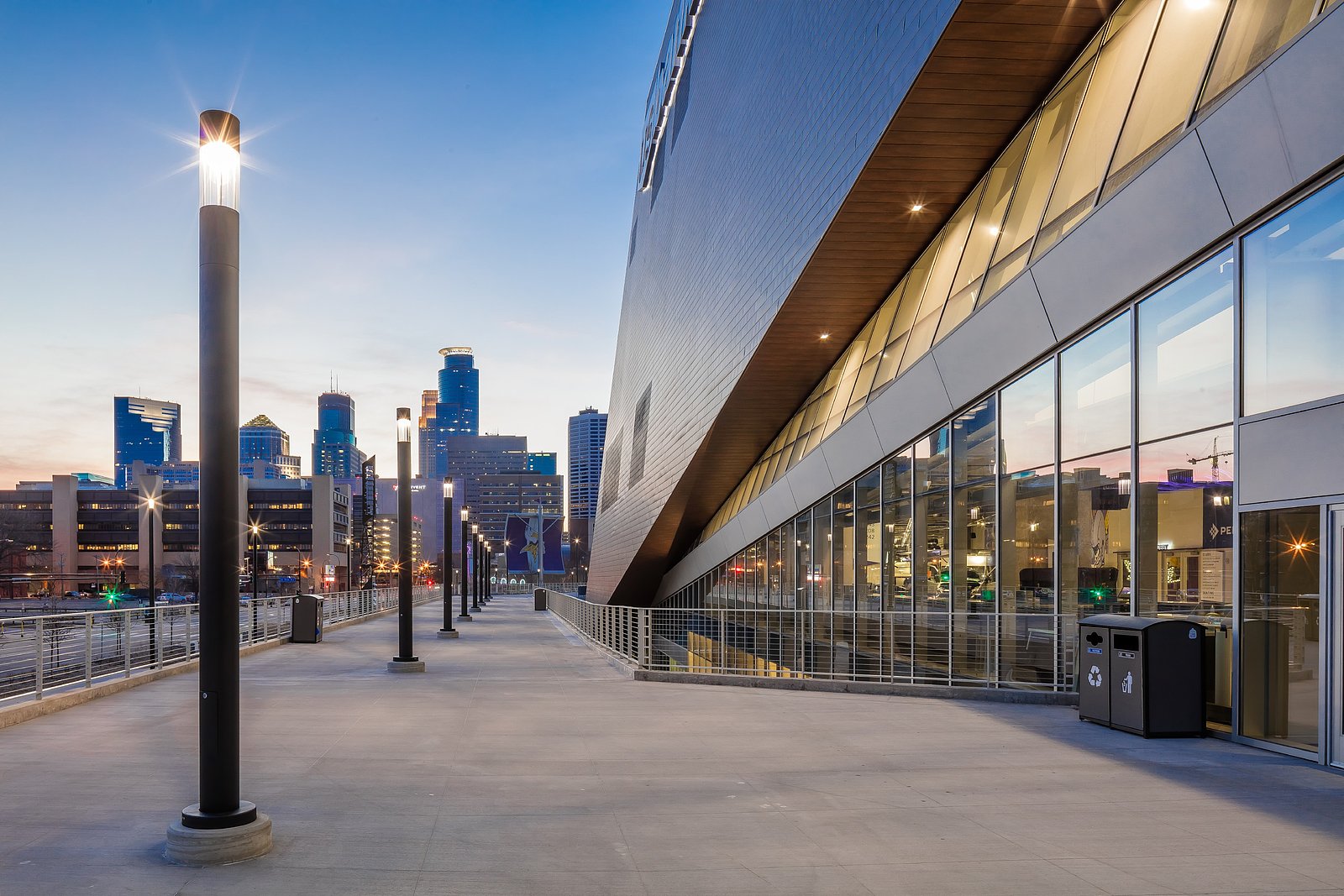 The multifunctional U.S. Bank Stadium in Minneapolis is home to the Minnesota Vikings – the famous American Football team of the National Football League (NFL). But it’s much more than that – it’s a sports and events facility of superlatives.

The U.S. Bank Stadium in downtown Minneapolis, Minnesota, impresses with ist spectacular architecture and a gigantic glass façade that refl ects the city skyline in a way that is simply breathtaking. The home of the Minnesota Vikings of the NFL and the University of Minnesota basketball team, the modern arena is a venue for prestigious sporting events.

In addition, it is used throughout the year as an event location for concerts, festivals, shows, school sport and college events, conferences and other major events. Popular musicians such as Taylor Swift and Ed Sheeran pass through its doors.

The outdoor area, known as Medtronic Plaza, and the entrances to the multi-purpose stadium are attractively illuminated by multifunctional CITY ELEMENTS from Hess. The modular illuminating columns meet a wide variety of lighting requirements and also have additional safety and communication functions. 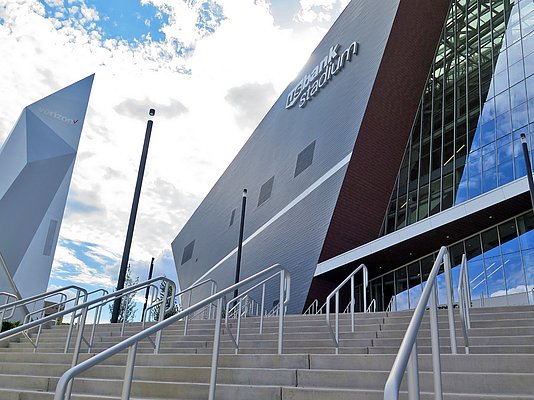 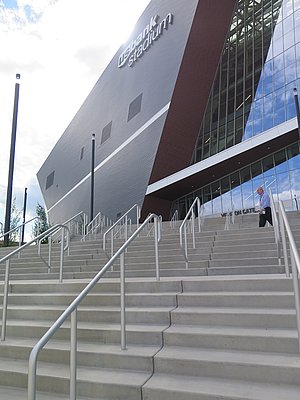 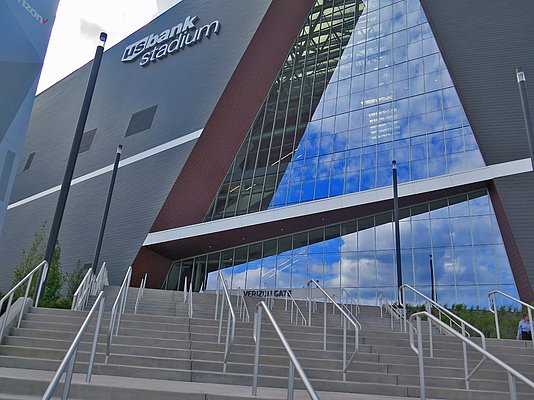 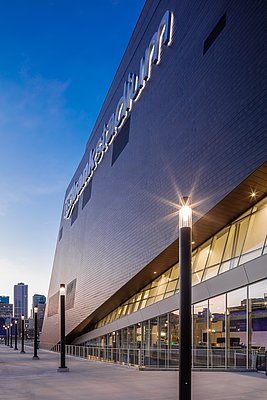 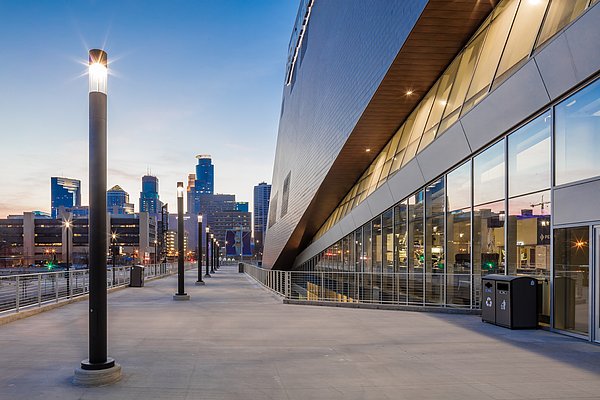 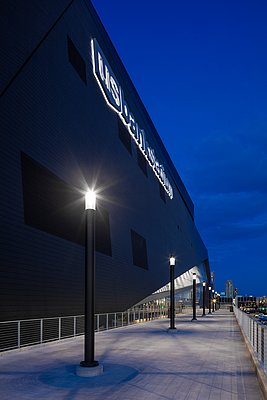 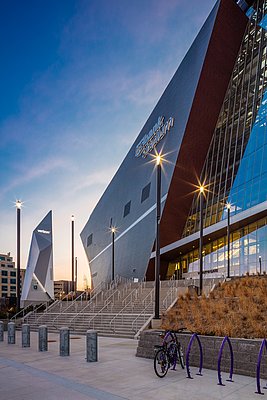 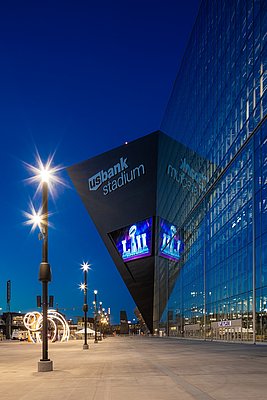 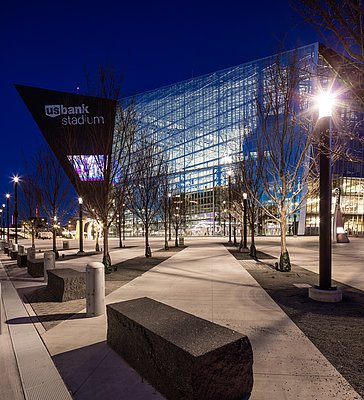 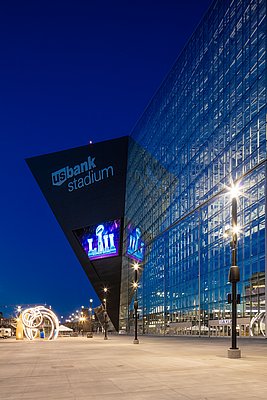 Culture and climate were the primary influences on the design

To emphasize the connection between the stadium and the city, the planning Team of the renowned American office, HKS Architects from Dallas, seized upon the special landscape features and the Scandinavian roots of many Minneapolis residents, which also came to bear in the name of the Minnesota Vikings.

The angular architecture of the building is based on the winter ice formations of the nearby St. Anthony Waterfalls and on the shape of Viking longships and longhouses.

Another unique feature is the sloping roof structure, 60 percent of which consists of a transparent and weather-resistant ETFE (ethylene tetrafl uoroethylene) membrane. This ETFE membrane protects the interior from rain and snow while ensuring outstanding natural lighting. For the 66,200 spectators on a total of seven stadium levels, this means a pleasant feeling throughout the year of being in the outdoors in an “air-conditioned” environment.

Since winters are quite cold and snowy, heating costs account for a large part of energy consumption – and in accordance with this, heating cost management was also a key element of the planning. The angular building shape chosen enables a completely new kind of air circulation.

The pitched roof forms an internal “heat reservoir” of solar energy, thus functioning as a natural snow-melting system. During the cold season, vertical pipes dissipate the warm air from the heat reservoir near the roof and distribute it evenly in the Stadium and seating areas.

The innovative design of the sports facility and the particularly energy and environmentally friendly building concept earned the stadium the respected “LEED Gold” sustainability certificate from the American Green Building Certification Institute (GBCI).

In addition to the “LEED Gold” certification, the stadium won another award. At the World Architecture Festival 2017, the Arena was the winner in the “Sports” category.

Closely interwoven with the experiential character and iconic design of the building is the lighting solution for the outdoor area of the stadium. In cooperation with the landscape architecture firm Oslund and Associates, the lighting designers from Illume Lighting Design and The Lighting Agency in Denver, Colorado were looking for a minimalist luminaire that would match the unusual building architecture and also offer potential solutions for lighting, security and communication components.

The multifunctional and modular CITY ELEMENTS featured precisely the variety of applications that planners were looking for: several functions concentrated in a single straightforward luminaire system.

“The simple shape of the luminaire combined with the option of integrating cameras, WiFi and additional spotlights into the luminaire at security checkpoints made a considerable contribution to reducing the lighting design to a few luminaire locations while still meeting the versatile safety requirements of a modern sports facility,” say the project participants from JTH Lighting Alliance in Minneapolis, who was involved as territory agent during the installation process.

A total of 71 CITY ELEMENTS illuminating columns with a diameter of 230 mm were installed. Nine different CITY ELEMENTS versions – ranging between four and nine metres height – create an inviting ambience and a high feeling of security.

“The simple shape of the luminaire combined with the option of integrating cameras, WiFi and additional spotlights into the luminaire at security checkpoints made a considerable contribution to reducing the lighting design to a few luminaire locations while still meeting the versatile safety requirements of a modern sports facility”

At the locations in the middle of the pedestrian zone, the four- and eightmeter-high CITY ELEMENTS have AR900 terminating elements, from which highpower LED modules with rotationally symmetrical emission characteristics provide uniform lighting.

In the areas near the edge, nine-metre-high CITY ELEMENTS with AA900 terminating elements and integrated shading ensure homogeneous illumination where it is wanted.

At strategically important junctions, the CITY ELEMENTS are equipped with a variety of additional functions. For example, 17 luminaires were equipped with devices for recording with security cameras.

Lighting and Wi-Fi components were included in other luminaires. The latter equipment provides unrestricted Access to network services in the outdoor area at the numerous events and ensures that fans are involved in what is happening in an entertaining manner.

Since it opened in summer 2016, the U.S. Bank Stadium has become one of the world’s leading stadiums. To date it has had more than three million visitors. The biggest sporting Highlight was the Super Bowl – the champi-onship game of the National Football League – in February this year.

The first event for Basketball fans is just a few weeks away: From 30 November to 1 December 2018, seven regional men’s teams will meet at the “Basketball Classic” – and exciting experiences for fans are already promised in the run-up to the “Final Four” mega-event of the NCAA (National Collegiate Athletic Association) in 2019.