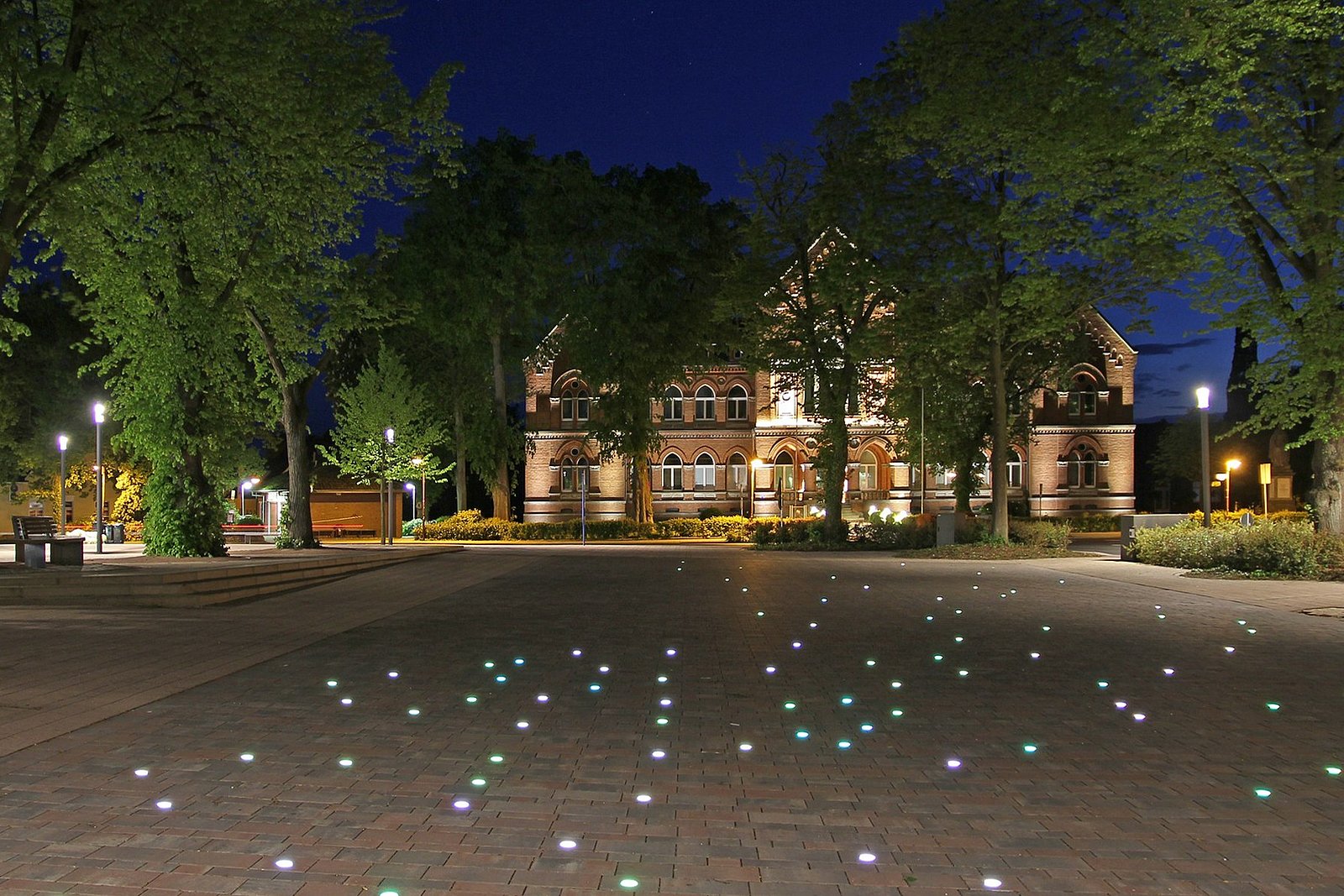 With 25,000 inhabitants, the town of Varel in Friesland is a modern regional centre between the cities of Oldenburg and Wilhelmshaven. Thanks to its scenic location on the Jade Bight, the “city between the forest and the sea” has high recreational value and is a popular holiday destination.

Landmark centre of the city

After several years of city centre redevelopment, the Varel pedestrian zone is showing itself from its very best side: The historic Palace Square, a large inner city open space on the north end of the pedestrian zone that is used for events of various kinds, was enhanced in a sensitive manner as the representative centre of the city.

The key elements of the space renovation included the implementation of a tailor-made lighting concept with CITY ELEMENTS illuminating columns and bollards from Hess and complementary in-ground luminaires and illuminating strips. The various light elements stage the Palace Square attractively and make it tangible as a whole through effective accent lighting.

The office of OC | Lichtplanung of Oliver Christen of Diepholz, which played a leading role in the development of the lighting concept, was recognized for the lighting design quality with the German Lighting Design New Talent Award 2015. The prize has been awarded annually since 2011 and sees itself as an honour for outstanding lighting design in architecture. 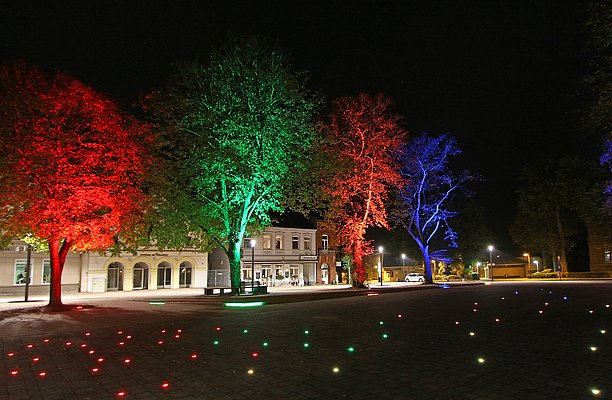 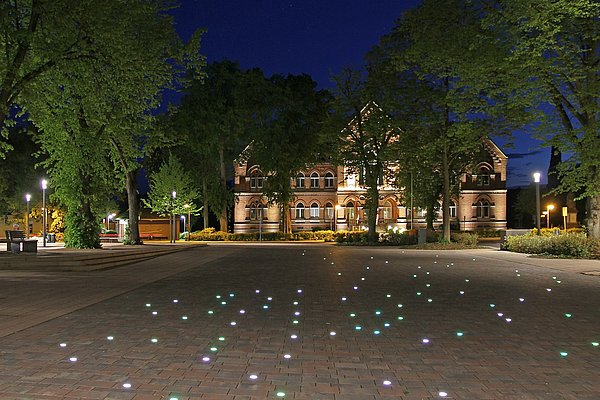 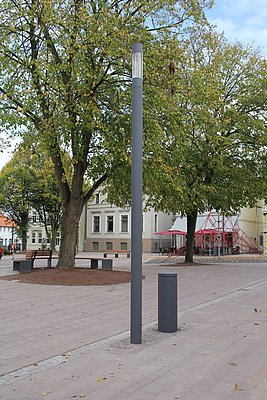 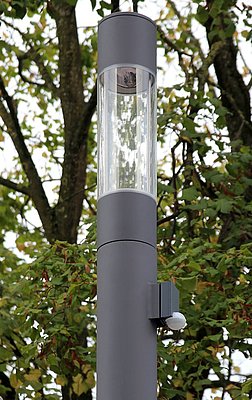 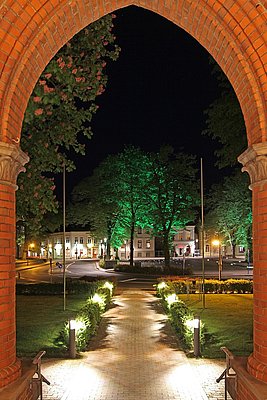 Contrast between wide-area and focused light

In addition to functional lighting of the Palace Square, the complex lighting concept includes effective accenting of the centre of the square, the adjacent trees, and the staircase leading to the square.

The basic illumination around the Palace Square framed by buildings with restaurants and stores, the Palace Church, and the listed district court building is provided by modern illuminating columns of type CITY ELEMENTS 180 by Hess with asymmetric light distribution. This continues the lighting design of the pedestrian zone, in which more than 30 luminaire models of the same type have been installed already.

A special feature of the illuminating columns are individually combinable basic, intermediate and terminating elements, which can be matched in their proportions and lighting technology in a manner that is perfectly suited to the urban environment.

To protect against the weather and salty sea air in Varel, the 5-meter-high luminaires feature a special, seawater-resistant paint. In addition, the surfaces of the luminaire were provided with an anti-graffiti coating.

Another six CITY ELEMENTS illuminating bollards with a height of 1.2 meters illuminate the entrance to the historic building of the district court.

The centre of the square: The experience in the foreground

The core idea of the lighting concept for the centre of the square was the thematic rendition of different seasons and occasions in varying, dynamic light scenes. Interactively influenced by the movement of pedestrians, the changing lighting always makes lingering on the Palace Square an experience.

100 points of light randomly distributed in the centre of the square and additional in-ground luminaires for accent lighting of the adjacent trees were installed, along with illumination strips on the stairs – all in colour-changing LED technology.

The light elements have been grouped into 4 basic seasonal scenes. In addition, stored dynamic light scenes can be accessed via three CITY ELEMENTS with motion sensors that are installed at different corners of the square: If the luminaires detect movement, a controller triggers a light scene. For a period of 3 to 10 minutes, this overrides the basic function of the lighting elements on the square and atmospherically creates seasonal scenes such as “summer, sunbathing and the beach”, “autumn leaves fall and blow away” or “winter ambiance with twinkling stars”.

“The interpretation of these seasonal themes, combined with the random selection of light scenes by the motion sensor, gives the viewer an ever changing image of the Palace Square, thus ensuring fascinating impressions again and again”, says lighting designer Oliver Christen, summing up.

In accordance with the events regularly held on the Palace Square such as the “Kramer Market” or “Pumpkin Festival”, Oliver Christen has designed additional tonally adapted lighting scenes.

“The interpretation of these seasonal themes, combined with the random selection of light scenes by the motion sensor, gives the viewer an ever changing image of the Palace Square, thus ensuring fascinating impressions again and again”

High level of use at events

Two convenient connection points for powering the market stalls are offered directly on the Palace Square in the form of Hess TOLEDO power and water bollards in a special design: Instead of the round cover in the standard version, the models have a flat top. This makes them fit in perfectly with the design of the CITY ELEMENTS luminaires.

Funded by the Federal Environment Ministry

The extensive redesign of Varel’s Palace Square was funded by the Federal Ministry for the Environment, Nature Conservation and Nuclear Safety, the Urban Development Fund of the Federal, State and Local Governments and the Lower Saxony Ministry for Social Affairs, Health and Equality.

The successful lighting concept contributes significantly to greater attractiveness of the town centre and stages the Palace Square in an appealing manner as a destination for the public.