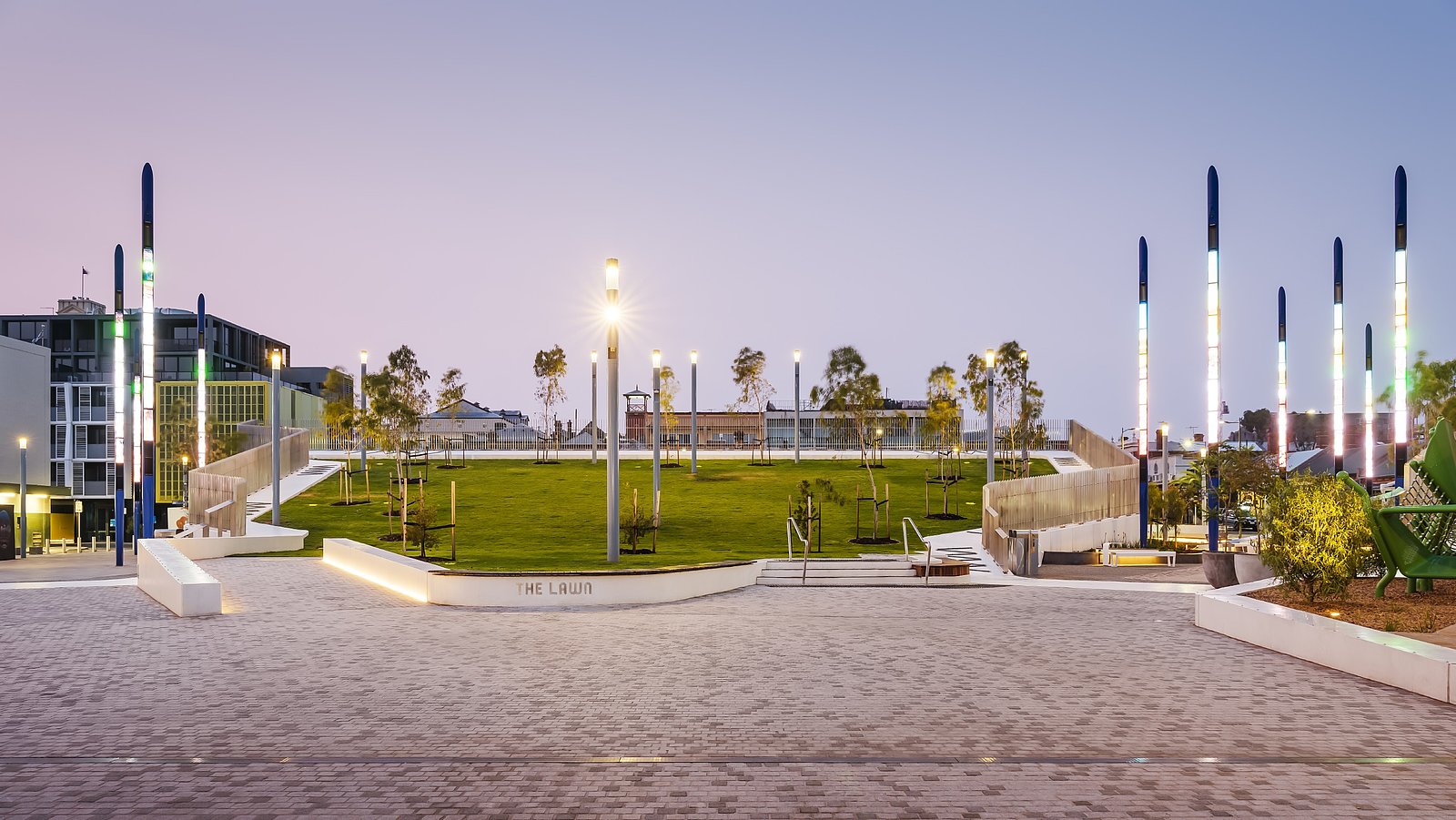 "The artwork is an imaginary island surrounded by reality." (José Ortega Y Gasset)

How a tired, unpaved car park became a green oasis. A special place was created for the community in the southern part of Melbourne, a place with very special products from Hess.

“The artwork is an imaginary island surrounded by reality.“ 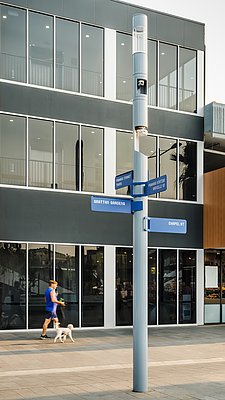 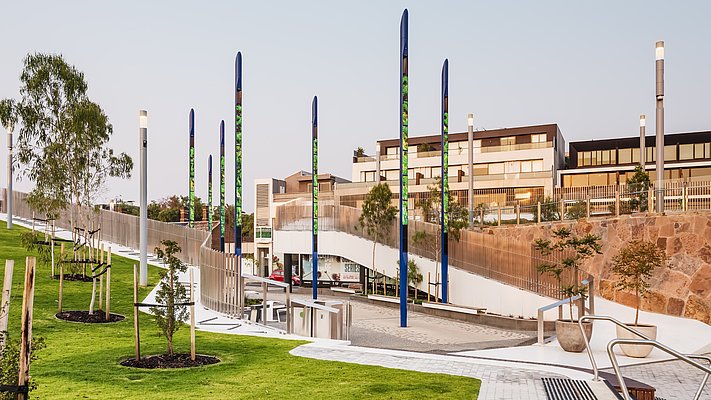 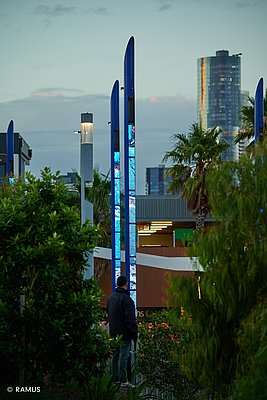 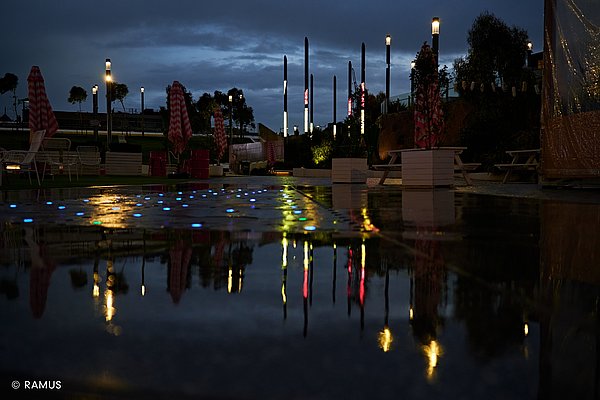 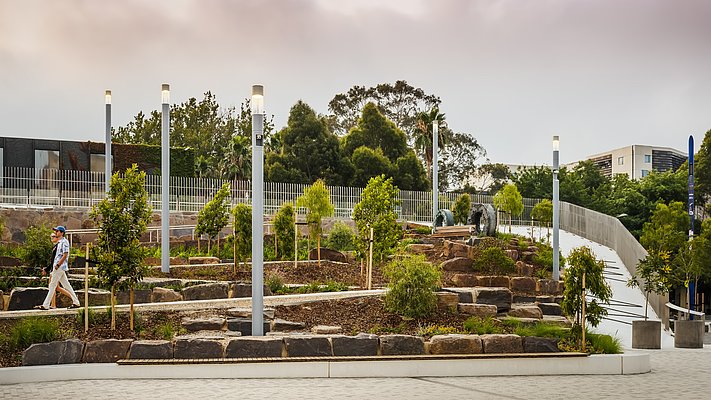 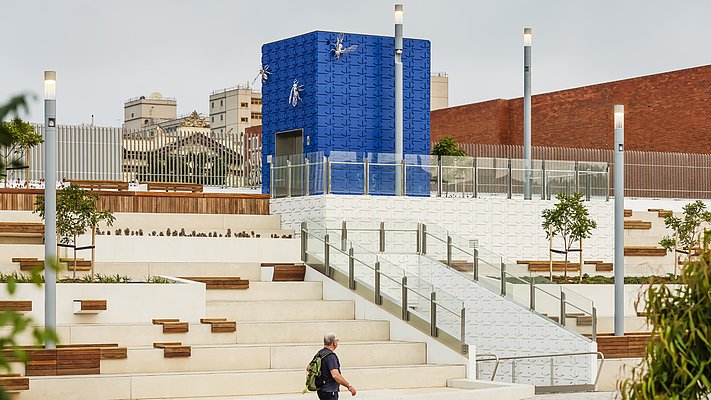 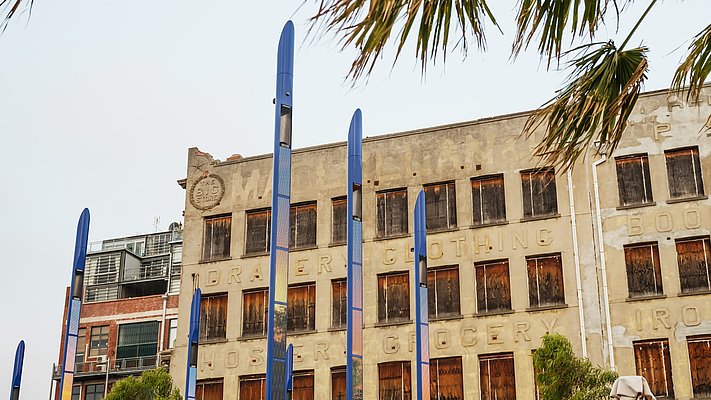 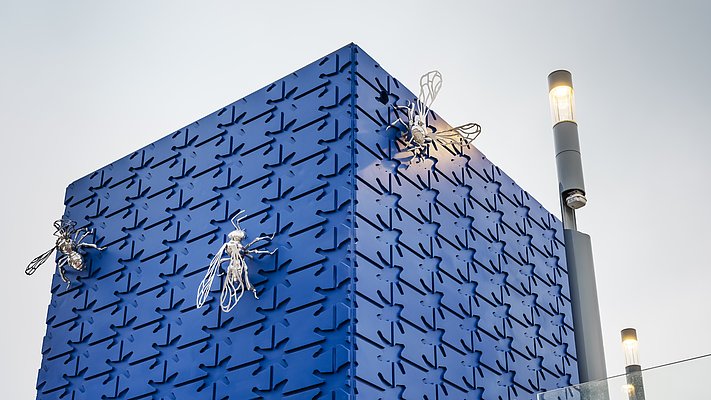 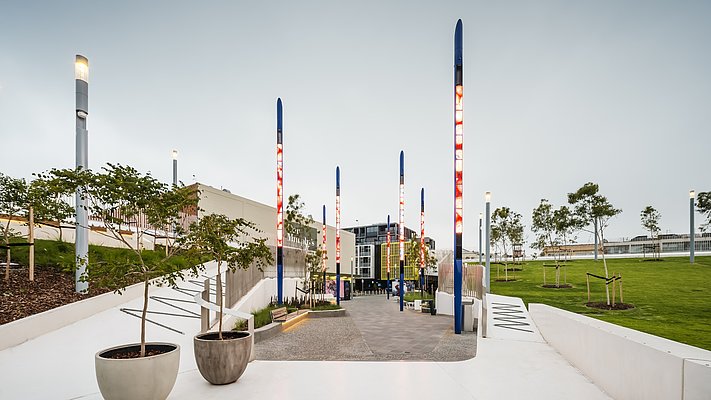 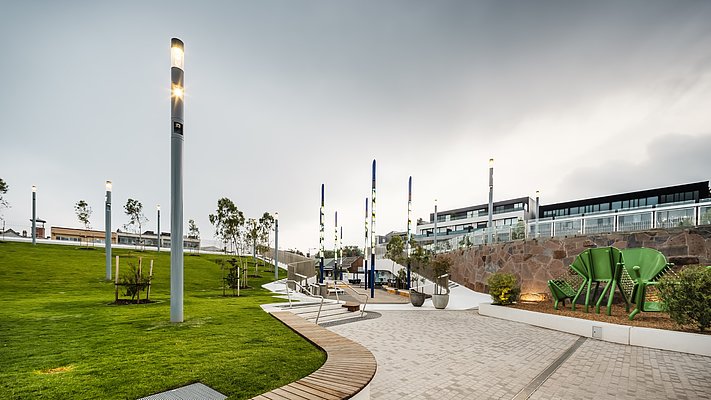 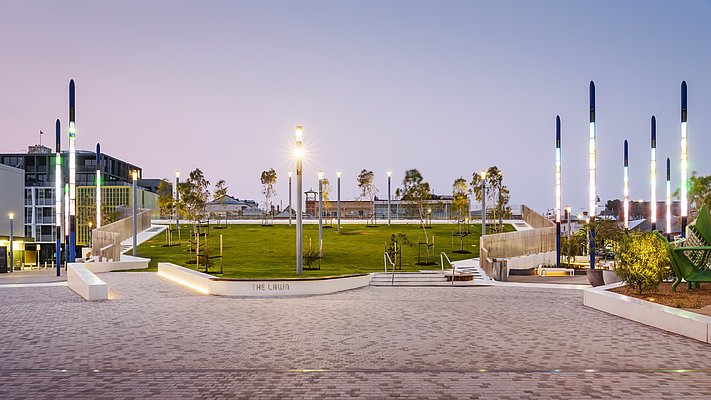 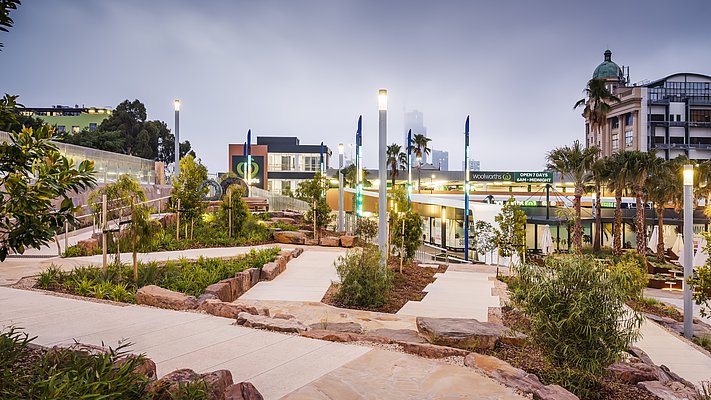 Once a barren asphalt wasteland, the old Cato Street car park was transformed in 2019 into one of the most outstanding multipurpose parks in the city of Stonnington, in the southeastern part of Melbourne. Now the 10,000-squaremetre area offers residents and visitors a shared open space that serves as a refuge from hectic everyday life as an idyllic haven amidst the hustle and bustle of cafés, restaurants and shops.

A conglomeration of architects, designers and urban planners created a unique space that has become precisely this haven for residents and visitors while blending into the neighbourhood perfectly. At the same time, it is a monument that pays tribute to the history, development and people of Prahran and unites the many aspects of the community.

One of the pressing concerns of the Stonnington Town Council was that more safe open space would be created for people to enjoy, especially since such spaces were previously in short supply. At the same time, they also did not want to see a reduction in parking opportunities, so the architects from Lyons and Aspect Studios designed a solution that combined underground car parks and aboveground city parks at the Cato car park location.

A park entirely dedicated to pedestrians was created in this way, one that was also free of all commercialisation. It is a place of tranquillity and rest that provides space to relax and reflect. It also includes space for large and small events, including markets and concerts, since such activity is also an important part of the social life of Prahran.

The anatomy and structure of the site were planned down to the smallest detail, with the surrounding neighbourhoods and their history being taken into account. The four entrances were designed according to their geographical association with the neighbourhood. For example, the entrance on the north-eastern side, known as the “Commercial Corner”, incorporates the same type of bricks that were used to build the old factories on Chapel Street on that side of the square.

Dividing the park into four areas, that meet in the middle as a large square, allows the park to meet a wide variety of needs. The area on the north side is known as THE GARDEN and has restaurants and sitting areas, THE TERRACE to the east has an amphitheatre-like layout, THE LAWN to the south is an open green space, and THE FOREST to the west includes a walking path through a landscaped area. Whether you are socialising with friends, enjoying a quiet lunch break, going through an early-morning yoga routine or just taking a short walk, Prahran Square offers an incredibly versatile set of venues for activity.

The illumination concept for the area includes the use of CITY ELEMENTS 230 from Hess. It was particularly important to the architects to select luminaires that create added value – in line with the principle of the modular and multifunctional CITY ELEMENTS by Hess. For this reason, the concept makes use of 39 CITY ELEMENTS 230 units, which not only provide good, atmospheric lighting and illumination but also take important security aspects into account – which led to many of the six-metre-high illuminating columns being additionally equipped with cameras. WLAN modules and additional spotlights were also installed.

A local issue in the form of the need for sewage system ventilation was dealt with in a clever manner, with 3 of the CITY ELEMENTS 230 units serving as sewer aeration installations with corresponding connection and operating capabilities. This meant that these much-needed “chimneys” could be perfectly integrated into the look of Prahran Square while remaining virtually invisible to visitors.

The entrances are of great importance to the park’s concept. They are meant to symbolise the transition from the city to the park, from business to taking a break, from one’s daily routine to a special place to slow down for a while – and from the past to the present, as accomplished through a structural design that integrates the respective zones of the neighbourhood.

The park itself is to mean even more, and there was a desire for the “experience of Prahran Square” to begin in the moment that people set foot in the park.

Bruce Ramus, one of Australias most prominent light artists, was commissioned with achieving an installation that, with this immense backdrop, aims precisely at bringing about a holistic experience. Ramus creates works of personal and civic development that reflect their environment and become the voice of the people. Combining form with function and bringing a sense of “show” to places dedicated to community and integration, his work encourages the public to take part.

He created just such a work at the entrance of Prahran Square in Stonnington, Melbourne: The Pipes.

Out of the forest and into the clearing

The Pipes, which bring organ pipes to mind, are 28 ultramarine blue media columns as a unique custom-made product from Hess with a total height of 11 metres, conically shaped and tapered towards the ground, and each with a diameter that ranges from 35 centimetres to just under 27 centimetres.

Six different types of columns were developed in order to fulfil a variety of different functions depending on their placement. In addition to loudspeakers, displays and opportunities to connect to an external power supply, 8 of the columns were supplied with options for mounting cameras, and another 13 were equipped with additional spotlights.

The blue columns symbolise a sort of “digital forest” that you walk through to leave the city and enter “the clearing” in the form of the square. The 11-metre-high columns play a wide variety of roles. Integrated high-resolution LED screens enable textures and images from the immediate surroundings to merge with impressive plays of light and colour in order to create dynamic visual effects and images.

Prahran Square in Melbourne, a space of the people and for the people. It only becomes what it is through people, through the activities, the mood and the atmosphere that they create in it.

This fascinating project demonstrates in a most extraordinary way the possibilities that Hess products offer. We can accomplish custom solutions that are truly unique.