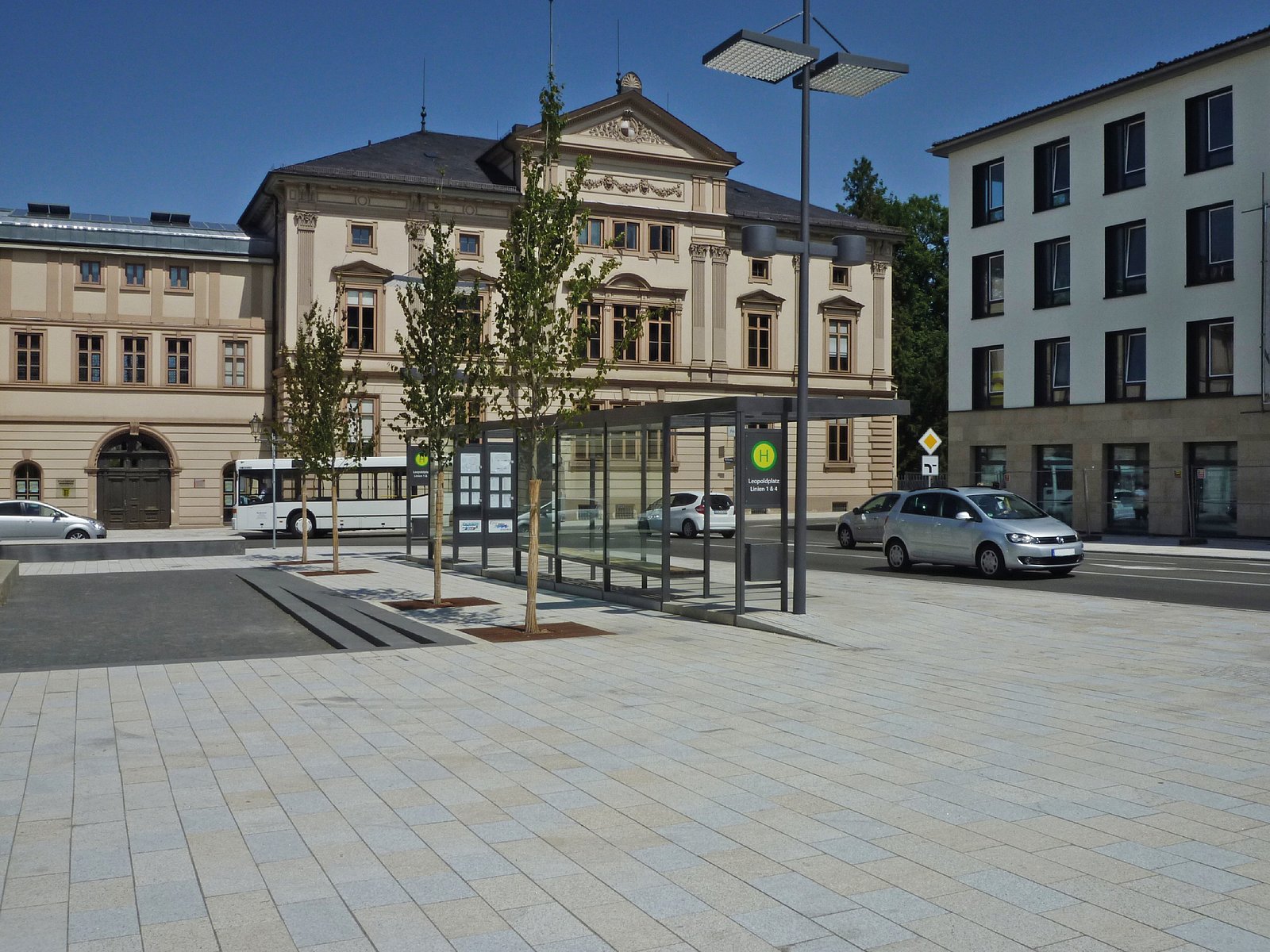 Attractive appearance for Leopoldplatz in Sigmaringen

With the redesign of Leopoldplatz, Sigmaringen has won back an attractive public open space in the Old Town: The preparations for the Sigmaringen Garden Show in summer 2013 marked the start of the comprehensive renovation of the area, which was given a sensitive upgrade as a bus hub and intensively used space for all types of events in a listed environment.

The Tübingen-based design agency Krisch Partner and the city of Sigmaringen were recognised by the Baden-Württemberg Association of German Architects, Bodensee district group, with the Hugo Häring Award 2014 for the artful redesign of the 2,500 m2 square, the lighting for which is provided in the evening and night time hours by high quality Hess luminaires of the VEDO type.

Integration and enhancement of the urban development ambience

The central goals of the restructuring were the functional improvement of the bus traffic and the improvement of the atmospheric quality, while at the same time dealing respectfully with the classic buildings around the Leopoldplatz. To this end, the 7 necessary bus stops, of which 4 had fixed locations with filigree roofing structures made from steel and glass, were arranged around the square.

As a result, a pedestrian area was created in the centre of the square, which is divided into three stepped levels. Precisely defined steps with integrated seating areas mark the transitions. Around the edge of the square, freshly planted rows of trees shade the inviting interior of the square without distancing it too much from the charming façades. 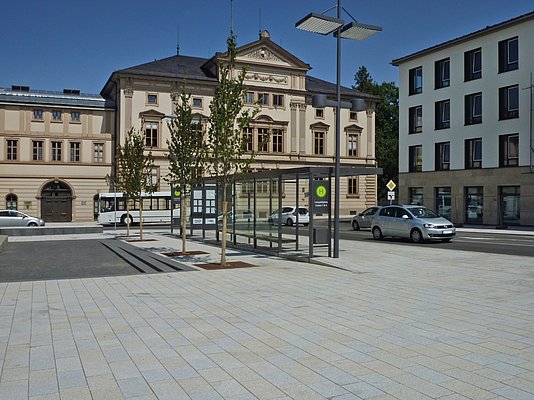 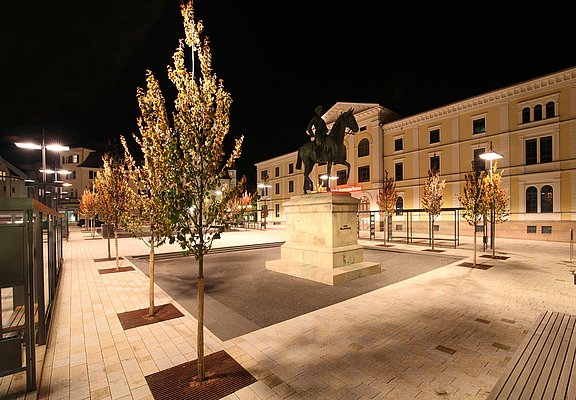 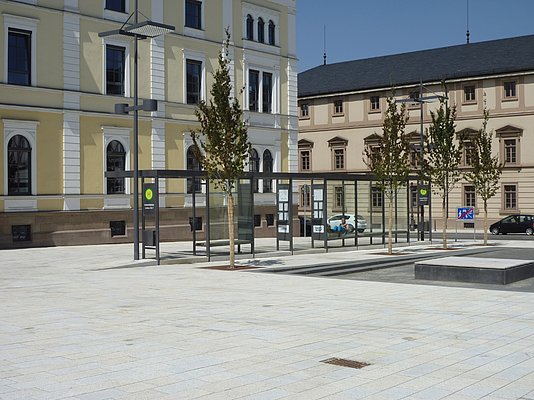 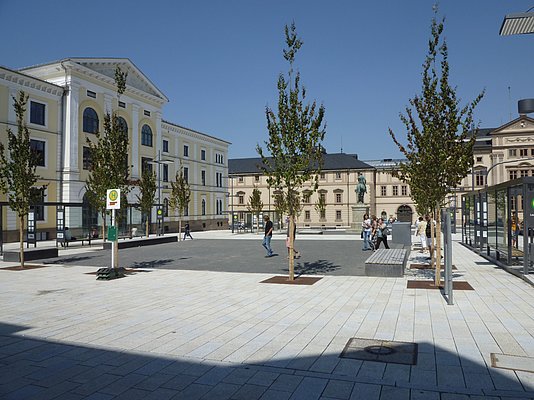 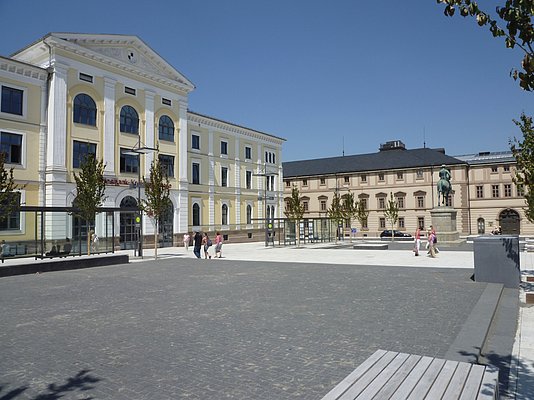 From the beginning, the lighting concept was an important part of the design in order to provide an attracting setting in the square even at night and ensure a feeling of security for passers-by.

Leading architect Rüdiger Krisch's planning team chose eight innovative VEDO luminaires from Hess, which work on the principle of light beam image splitting, for lighting the square. As a result, the incidental light from the mirror reflector is distributed evenly across the area to be lit. "The contemporary appearance of the luminaires is very well suited to the individually developed waiting areas, made from steel and glass, on the bus stops," says Rüdiger Krisch.

The 6.5 metre tall model with a double bracket also ensures that the square is evenly lit from fewer light points. "There are no other luminaires on the square. The luminaires installed also light the bus stops, shining through their glass roofs," explains the architect.

"The contemporary appearance of the luminaires is very well suited to the individually developed waiting areas, made from steel and glass, on the bus stops" 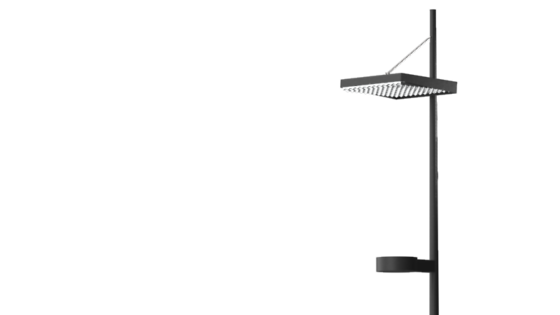 The Hugo Häring Award 2014 acknowledged the restructuring, which is consistent with the design of the city, of the Leopoldplatz with a successful green and lighting concept taking into account the transport requirements and the surrounding historic urban environment.

The award, named after architect Hugo Häring, is considered to be a recognition of exemplary structures and urban facilities in Baden-Württemberg and is awarded annually by the Association of German Architects Baden-Württemberg to developers and architects jointly. As a result, the Sigmaringen project also qualifies for the Hugo Häring State Award 2015, the winner of which is chosen every three years from among the regional awards.