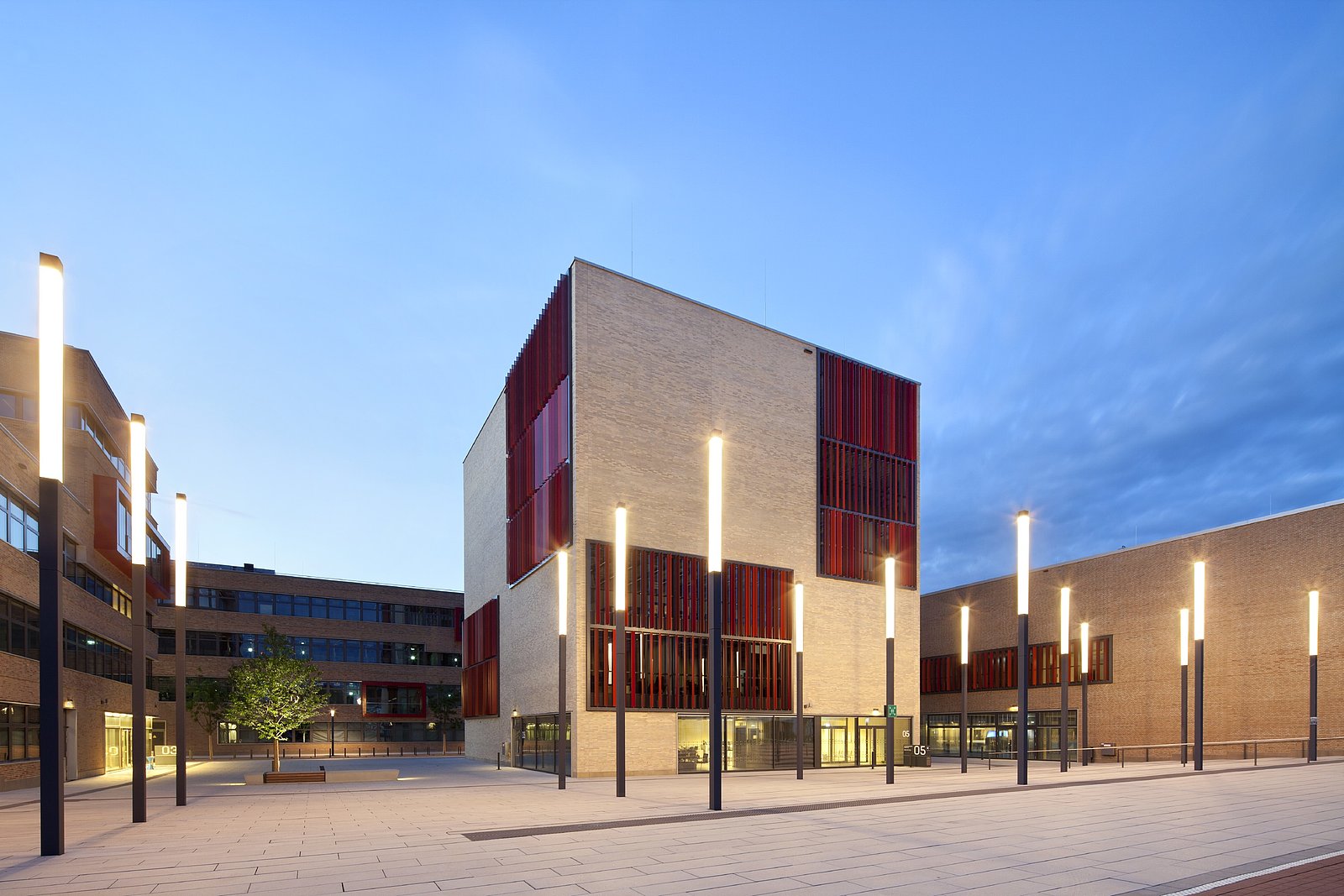 Hochschule Ruhr West: Attractive study location in the heart of the Ruhr

Hochschule Ruhr West (HRW) is a young state university of applied sciences oriented toward natural sciences and technology. It was founded in 2009 by the state government of North Rhine-Westphalia and now has some 4500 students at the two locations of Mülheim an der Ruhr and Bottrop.

At the newly built campus in Mülheim an der Ruhr (Germany), which replaces the previously rented premises, staff and students have access to modern institute buildings, a lecture hall, a cafeteria, a library, a multi-storey car park and an inviting neighbourhood square in the centre of the campus.

Shapely VIGO illuminating columns, custom-built for this project, highlight the main entrance of the campus with an impressive height of 10 metres. They are striking, due to their unusual appearance, during the daytime and provide atmospheric illumination in the evening hours. In this way the VIGO luminaires, which have been matched in their proportions to the building architecture, set attractive design accents both by day and night.

At the entrances and driveways to the surrounding buildings, CITY ELEMENTS 180 illuminating columns facilitate orientation. Through their clear design, the VIGO and CITY ELEMENTS luminaires complement each other perfectly and are in harmony with the architectural environment. 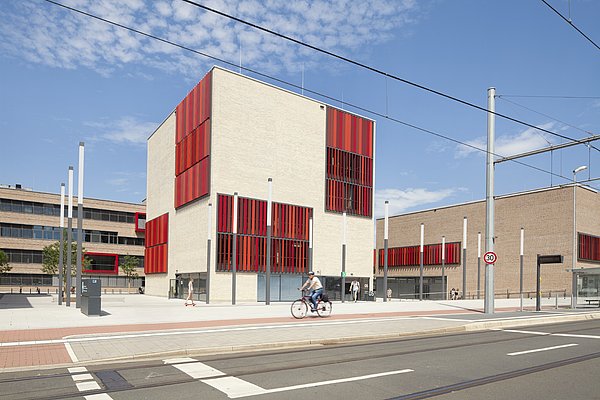 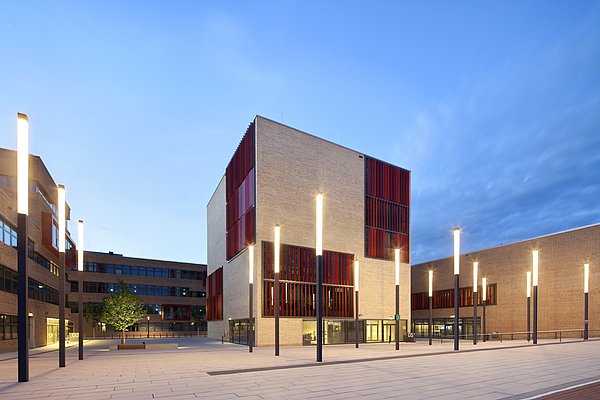 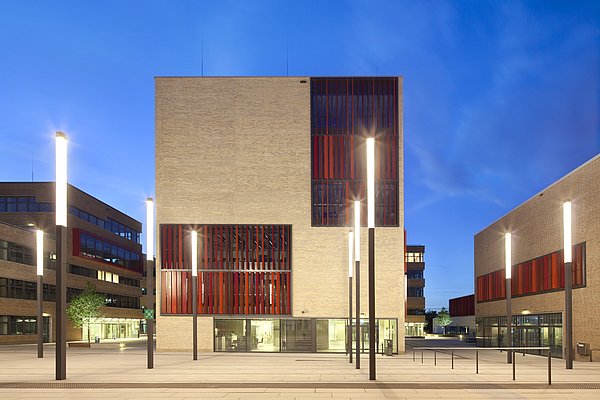 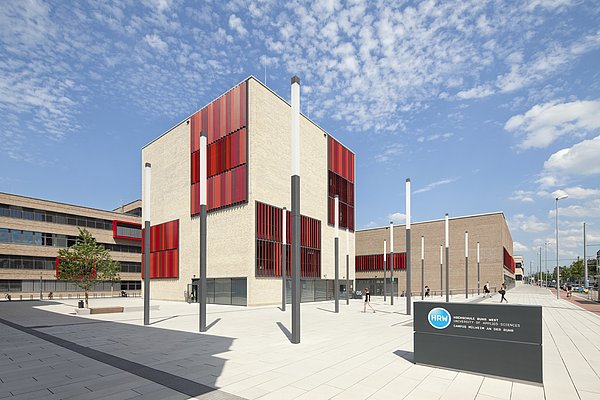 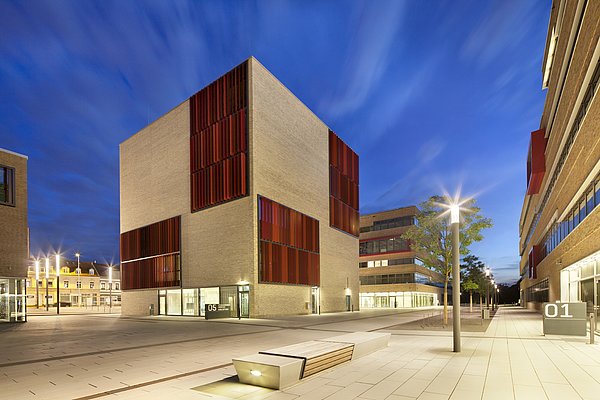 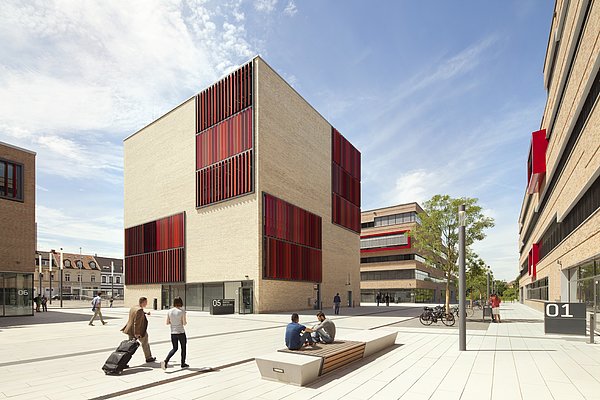 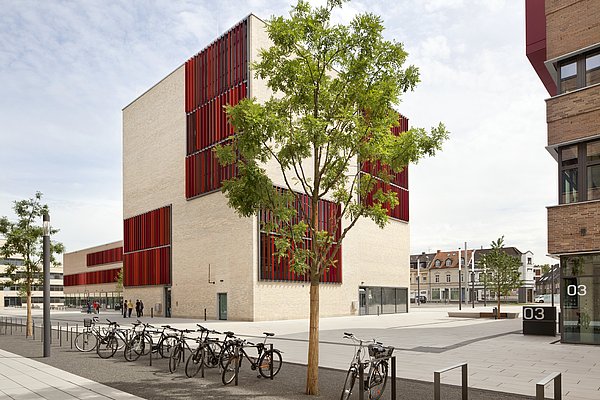 To plan the complex, a Europe-wide architectural competition was advertised, in which the creation of an urban university campus with a clear identity, welcoming qualities and flexibility of use was the focus. At the same time, the new building was to be anchored on the 43,000 square meter site of the former repair facility of the Federal Railroad in the urban structure of the district of Broich.

The design of Arbeitsgemeinschaft Hentrich-Petschnigg & Partner (HPP)/Astoc and the Oberhausen Planning Group emerged as the winner of the competition.

The new university is focused on a central square with inviting seating, from which the four buildings of the institute as well as three special buildings (library, cafeteria and lecture hall centre) can be reached through foyers. The square is covered with large slabs. Inlaid in-situ concrete, marks the centre of the square as well as the common areas, referencing the industrial past of the location.

The desired urban character of the complex results from the attractive 2- to 6-storey building structure with brick façades and large ribbon windows, whose roof surfaces are used as terraces in part.

The four buildings of the institute each have an inner courtyard or terrace which is enclosed to varying extents. Perennial plantings and a magnolia tree in each case make these places into peaceful green islands with additional seating.

The lighting concept of the Oberhausen Planning Group takes up key aspects of the open space design and highlights the different spatial qualities of the university complex: For example, 15 tightly placed 10-metre-high VEGO Hess illuminating columns, customized for the project, impressively accentuate the main entrance to the campus, giving it a representative appearance.

An important criterion for the exterior design was unified interaction between architecture and lighting. To achieve this, the designers opted for a special design of the VIGO illuminating column which was matched in its proportions to the buildings of the university campus. Thanks to the special solution expertise of Hess, the VIGO luminaires meet the specific design and lighting requirements of the planners.

The appearance by daylight as an important criterion

“In addition to the functional significance, the spatial effect of the illumination elements was decisive for the selection,” reports landscape architect Andreas Hegemann from the Oberhausen Planning Group. “The VIGO luminaires not only illuminate the entrance area at night; they structure the space and markedly highlight the entrance even in daylight,” he says, summing up.

The VIGO luminaires were adapted to the entrance area and the surrounding buildings in terms of height and proportions. “At a height of 2620 mm, the length of the light output corresponds to the shading louvres on the windows, and the total height of the luminaires is based on the height of the second floor of the lecture hall centre. This creates a uniform appearance of the building ensemble and exterior elements,” says Andreas Hegemann.

“The VIGO luminaires not only illuminate the entrance area at night; they structure the space and markedly highlight the entrance even in daylight.” 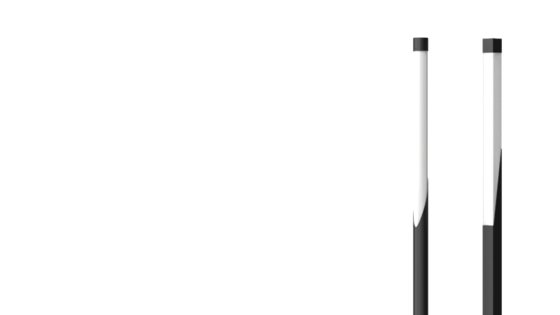 The individual driveways and paths connecting to the neighbourhood square are homogeneously illuminated by a total of 19 CITY ELEMENTS 180 illuminating columns with a height of 4500 mm. “In these areas, the functional illumination is in the foreground. What is important is a uniform design throughout the campus and thus luminaires with a clear expression of design,” says the landscape architect.

With their restrained design, the CITY ELEMENTS integrate extremely well into the overall architectural image, ensuring good orientation on the campus premises.