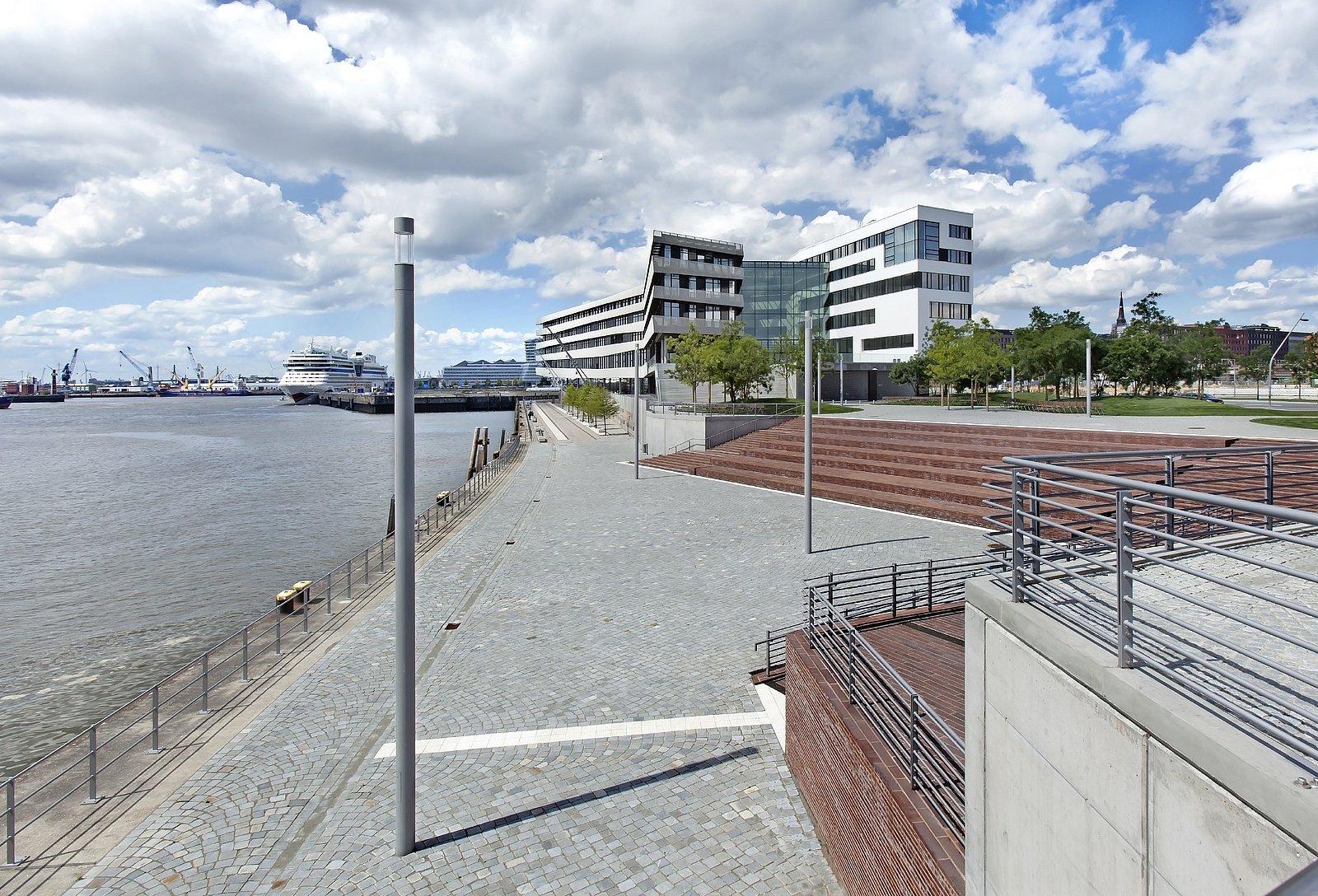 HafenCity University Hamburg: University at the forefront of progress

The profile of the HafenCity University Hamburg (HCU) is unique, even beyond the borders of Germany: Since its foundation in 2006 by the Hanseatic City of Hamburg, the university for 'architecture and metropolitan development' is the only university in Europe to focus on future relevant issues and the challenges of metropolitan environments.

New location in one of Europe's most dynamic metropolitan regions

The new modern building of the university in the Hamburg district HafenCity - currently one of the largest inner-city urban development projects in Europe - creates ideal prerequisites for teaching and researching the complex phenomenon 'metropolis'. On a building plot of almost 60 hectares, an attractive central urban space with living and working quarters and extensive parks is gradually taking shape. The distinctive university building directly at the harbour "Baakenhafen/Magdeburger Hafen" with view to the river Elbe consolidates the seven sites of the university, which until now were located throughout the city.

The newly designed university square in front of the eastern entrance of the building is an inviting area to take a break and at the same time a much frequented thoroughfare. Providing access to Lohsepark, the waterside promenade, the underground station 'HafenCity University', and the adjacent harbour bridge "Baakenhafenbrücke", the university square is an important crossing point of urban foot traffic. The varying characteristics of the area are emphasised by a sophisticated open space design and ambient illumination thanks to the CITY ELEMENTS LED illuminating columns by Hess. Their style elements are continued by the Hess PUNTO 700 waste receptacles, installed across the square and along the waterside promenade. 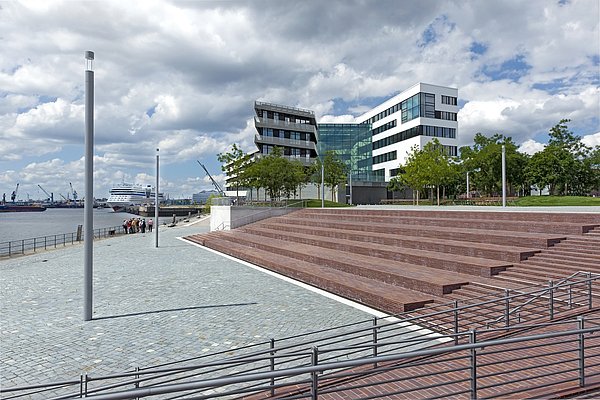 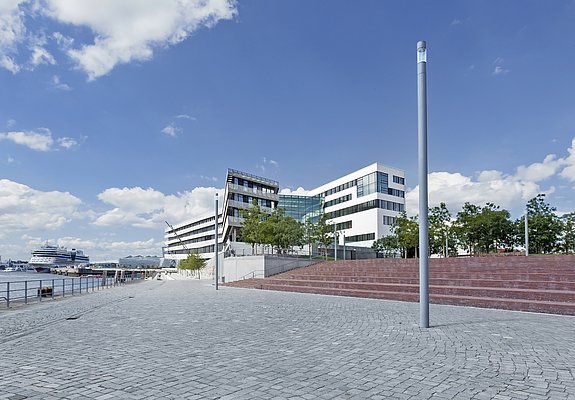 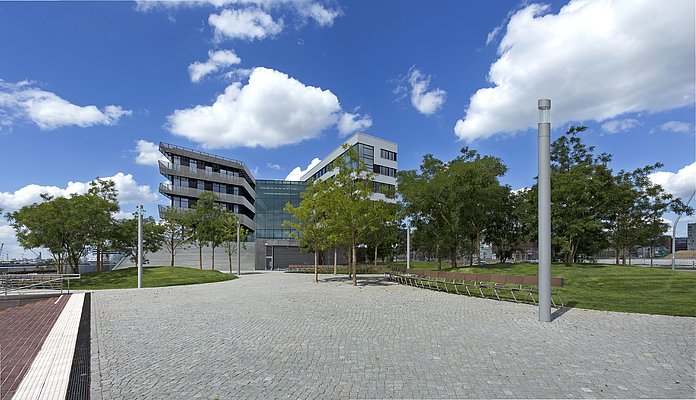 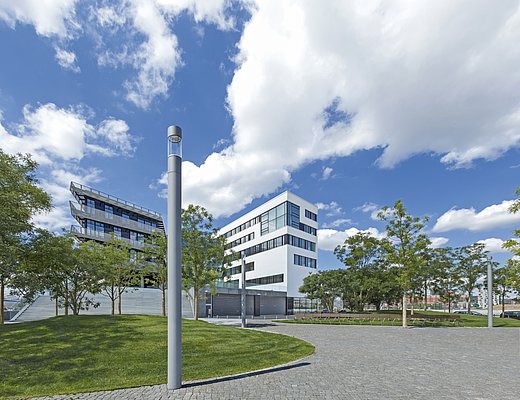 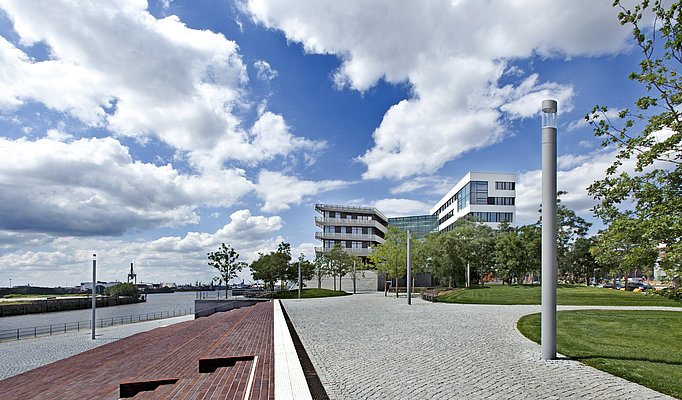 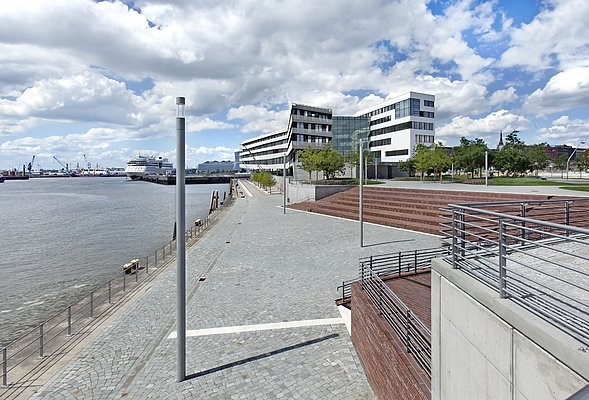 The CITY ELEMENTS by Hess provide a pleasant lighting ambience

Taking as starting point the various uses of the university square, the Berlin landscape architecture agency Vogt developed an open space concept suitable for the different functions of this area. Thus, the clinker outdoor steps level out the different surface heights between the university entrance at the Lohsepark and the waterside promenade.

While seating steps integrated in the middle of the main steps with view to the river Elbe emphasise the urban character of the area and invite to take a break, the side steps and a ramp for prams, pushchairs, bicycles and wheelchair users allow pedestrians at times with high footfall a quick crossing to the Lohsepark and HafenCity.

As much light as possible - as little light as required

The lighting concept of the university square is closely linked to the landscape architectural design and follows the motto "as much light as possible - as little light as required". Bearing this in mind, the lighting is required to make the most important walkable connections between the university and the public development as well as between the square and the promenade across the steps and ramps visible and safe. “We focus more on discreet support of the open space concept, rather than the actual lighting effects,” explains landscape architect Johannes Hügle of the Berlin design agency Vogt the main requirement for the lighting solution.

For a functional and at the same time visually unobtrusive lighting design the CITY ELEMENTS illuminating columns by Hess proved to be suitable. “In addition to the much understated design of the light elements, the convincing lighting technology, and the very flexible system with varying light source heights and lighting types were decisive for the selection of the CITY ELEMENTS,” emphasises Johannes Hügle.

With their elegant daytime effect, these luminaires fit perfectly into the surroundings and varnished in the silver grey shade DB 701 they match cobblestones pavements perfectly. With a diameter of 230 mm, even the proportions of the CITY ELEMENTS blend into their urban surroundings. “Due to the height difference of about 3 metres between the square and the promenade, the light source heights of the columns were selected so that for the viewer the light points appear to be at the same level,” says landscape architect Johannes Hügle.

“In addition to the much understated design of the light elements, the convincing lighting technology, and the very flexible system with varying light source heights and lighting types were decisive for the selection of the CITY ELEMENTS”

In the terminating elements of the luminaires, two LEVO LED modules each with a system capacity of 46 watts ensure a high light quality and good colour rendering during the night. Important path connections are thus illuminated that they are recognisable even without daylight. Depending on the location and the lighting technology requirements, the CITY ELEMENTS have a symmetrical or asymmetrical light distribution. 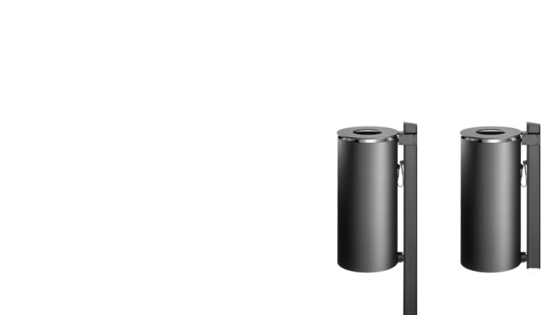 More than a waste receptacle: PUNTO 700 by Hess

As specialist and one-stop supplier for designed outdoor luminaires and high-quality complementary site furnishings, Hess was able to fulfil the requirement of an integrated design concept for the university square. Thus, the CITY ELEMENTS and the PUNTO 700 waste receptacles complement each other in design and colour successfully. Here PUNTO not only convinces with its functionality, but also with its timeless style elements - the model was awarded the "if seal" for outstanding design by the industry forum Hanover.

Frame and container of the PUNTO 700 are made from galvanised steel and are particularly weather resistant. In order to empty it, the 45 l container is simply folded out to the front.