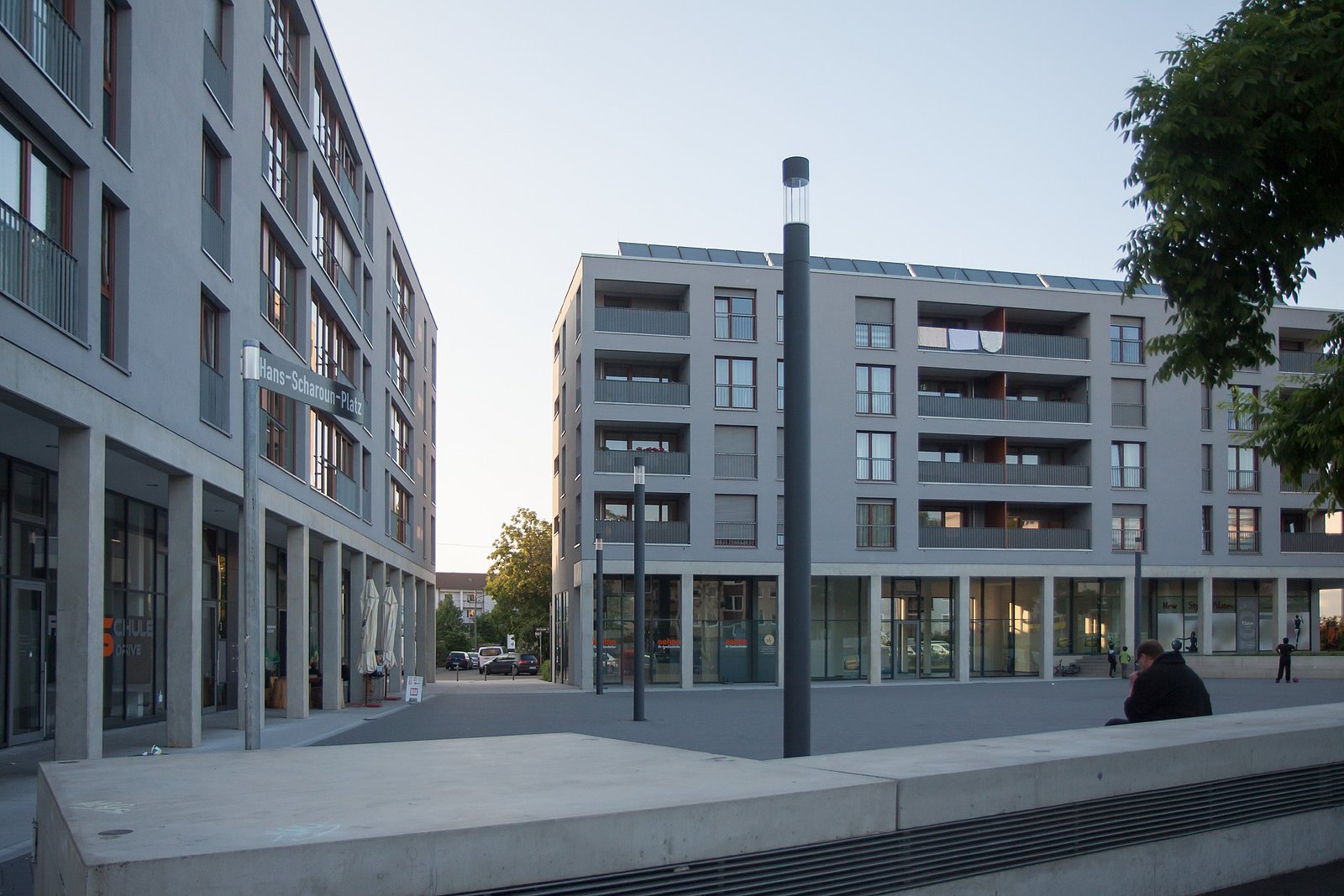 With Hans Scharoun Square in the Stuttgart-Rot district, a new district centre, which did not previously exist in this form, has emerged. On the basis of an urban planning competition, the area of a public car park was shaped into an attractive neighbourhood square through the construction of two adjacent five-storey buildings.

Awarded with the German Developers’ Prize 2016

The successful combination of housing, commercial space and a diverse local shopping centre around the square, along with direct access to public transport, ensures high quality of life and gained special recognition for the new centre: the awarding of the German Developer Prize 2016 in the “New Construction” category. The award recognises exemplary innovative projects that make a lasting contribution to urban development.

Timeless Hess CITY ELEMENTS illuminating columns are responsible for homogeneous illumination of the square in the evening and night hours. 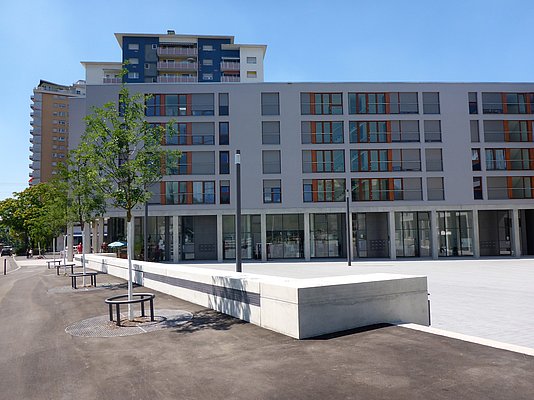 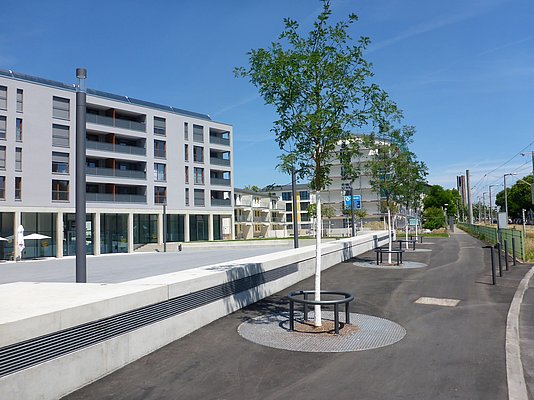 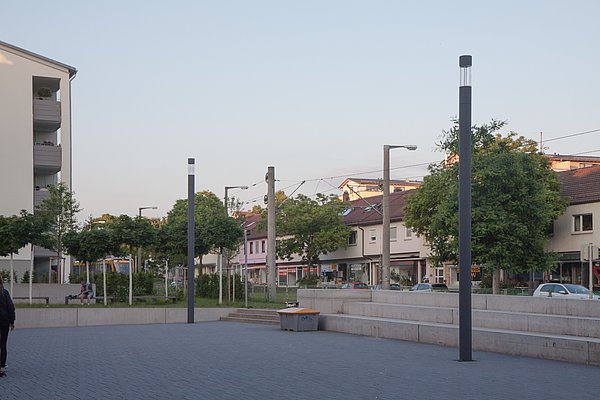 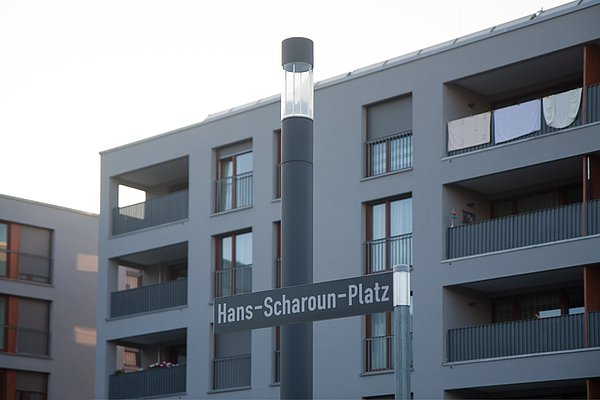 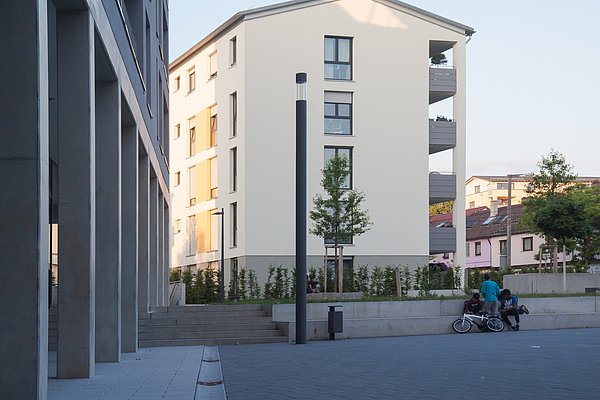 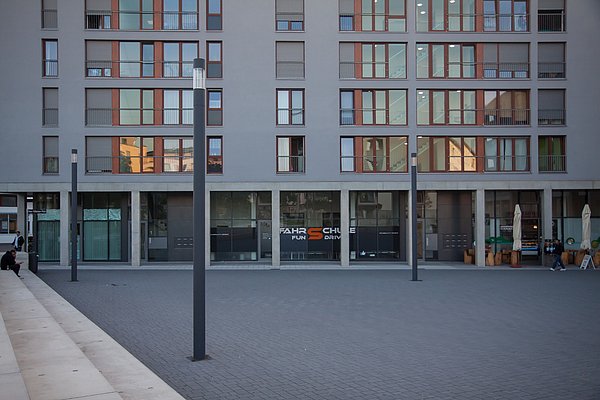 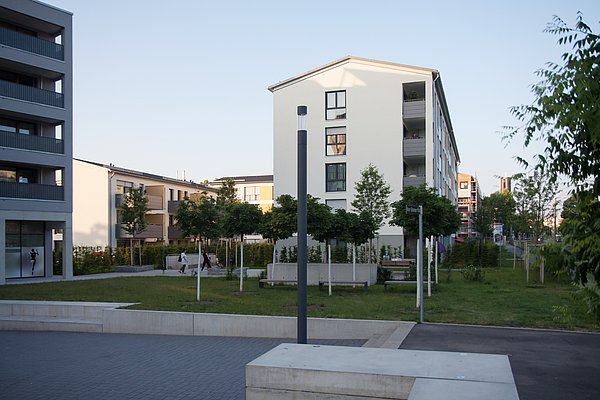 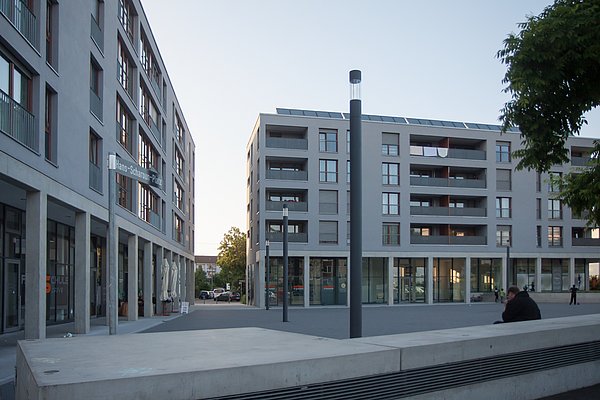 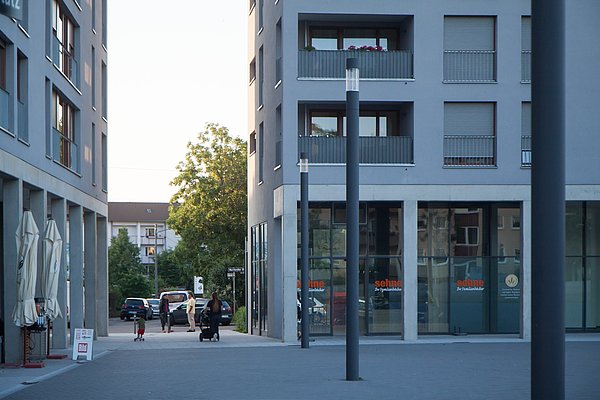 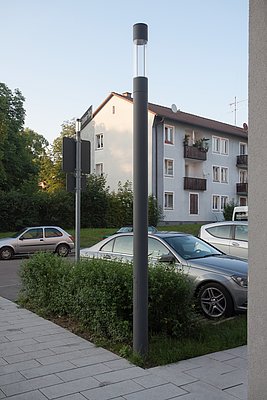 The “Townsquare” project was developed as part of “Socially Conscious City” – a support program of the City of Stuttgart for high-quality urban renewal which relies on the participation of the population as well as local clubs, associations and institutions.

Here the citizens wanted attractive apartments, commercial space, underground parking and a public space with high amenity value. The design of the Stuttgart planning office Kaiser + Kaiser Architekten BDA emerged as the winner of the urban design competition in 2007. The municipal housing authority (SWSG) provided the housing construction with sustainable energy supply, and the landscape and architecture were designed according to the draft of the Stuttgart landscape architects Wiedemann + Schweizer.

The name of the new centre was also discussed and decided among the working groups of the “Socially Conscious City”: Hans Scharoun Square This honours the important German architect of modernity Hans Scharoun, who already created defining and identity-forming elements in Stuttgart‘s “Rot” district with the listed skyscrapers “Romeo and Juliet”.

Through the high citizen participation in the planning process, the neighbourhood square has become a lively meeting place and the face of Stuttgart‘s “Rot” district for many residents. The Civic Association is pleased with this new square as it provides space for various events, such as a weekly market.

As a key project of urban renewal, Hans Scharoun Square sets the standard for future urban development in Stuttgart's “Rot” district. The fact that the parties involved are on the right track is documented by the recognition with the German Developers’ Prize 2016. “Appreciation expressed in the form of a prize provides recognition for the performance of all those involved in planning and gives further encouragement,” explains Heike Mössner of the Office for Town Planning and Urban Renewal of the City of Stuttgart.

Attractive illumination of the square

In addition to the timeless design, CITY ELEMENTS offers high efficiency. “The ability to be flexible through light modules and cover the entire surface of the square with few Illumination points played an important role in the selection of luminaires”, says Heike Mössner, explaining the lighting concept.

Depending on the location, the illuminating columns are equipped with one or two powerful LEVO LED modules from Hess in the light colour 4000 K. Their installation on the square perimeter enables versatile use of the square centre without sacrificing visual comfort and light quality.

CITY ELEMENTS from Hess is a luminaire system that is suitable for all requirements in the city and in front of prestigious and high-profile buildings. These modular illuminating columns are suitable for any lighting tasks and fit perfectly with the existing urban surroundings, as well as with a wide range of architectural requirements, thank to their characteristics: individually combinable base, intermediate and terminating elements, two different diameters, various lighting technologies and variable heights of up to 9 meters and above.

Furthermore, a variety of additional function and supply solutions for various municipal and technical requirements can be implemented with CITY ELEMENTS, such as electricity and water supply, Christmas illuminations, camera installation in security areas, emergency calls, attractive light projections and e-mobility functions.