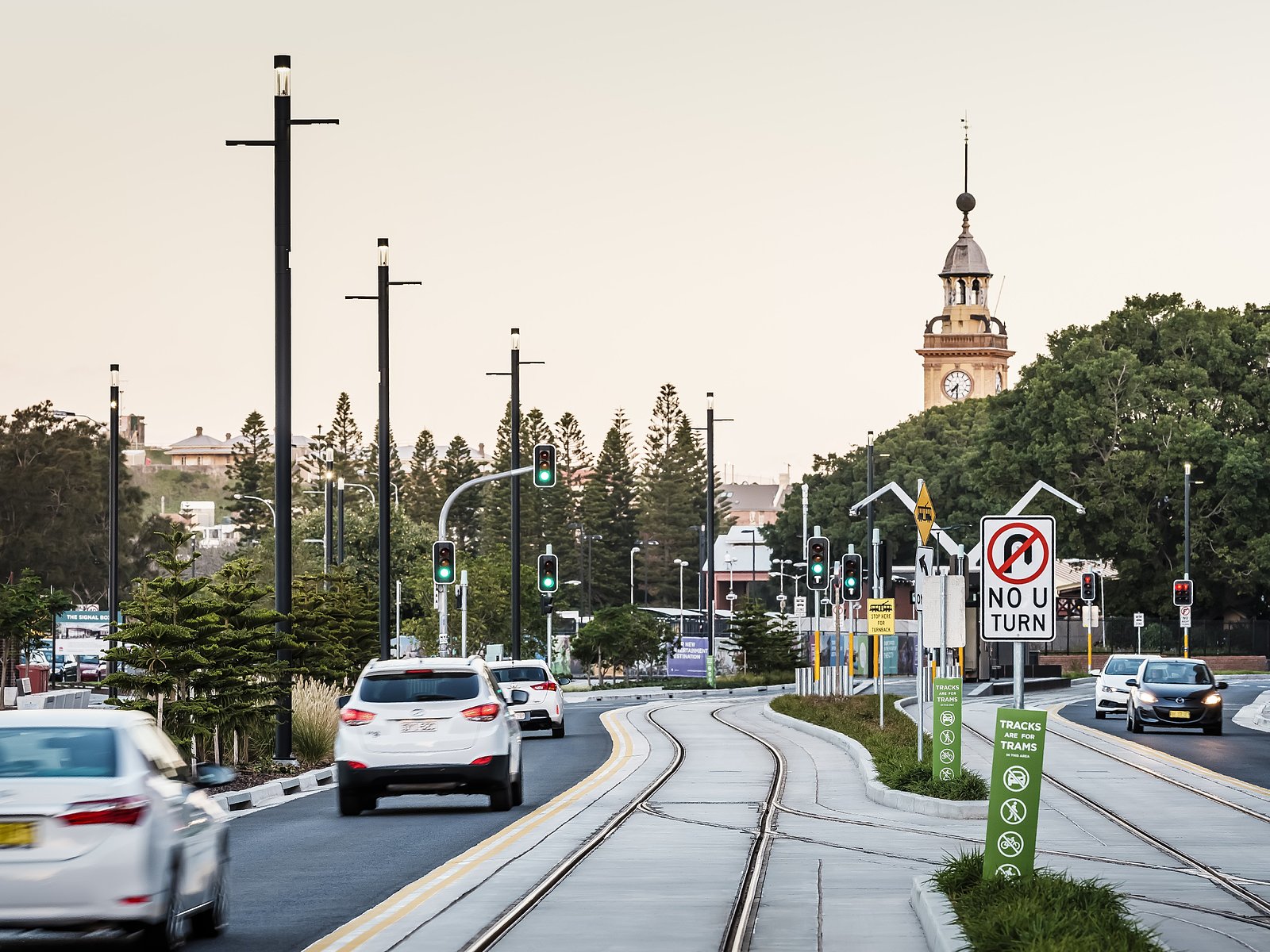 NEWCASTLE: Australia's harbour city, shines its way into the future

With its new smart lighting concept, as part of the Smart City strategy, Newcastle is considered to be a pioneering city in Australia. The new lighting is the largest, integrated, multifunctional luminaire installation anywhere »Down Under«.

SMART CIT Y OF THE YEAR

The Australian city of Newcastle, located in the state of New South Wales and the country's eighth largest city with around 300,000 inhabitants, is characterised by an interesting contrast between the world's largest coal export harbour, with its huge cargo ships on the one hand and the distinctive art and culture scene with numerous galleries, colourful street art and graffiti on the other hand. 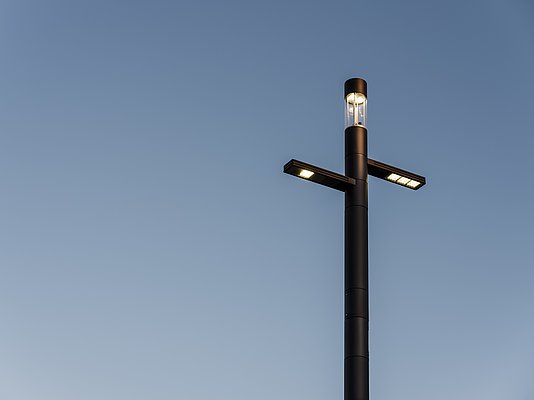 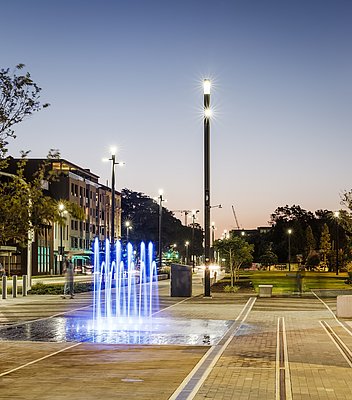 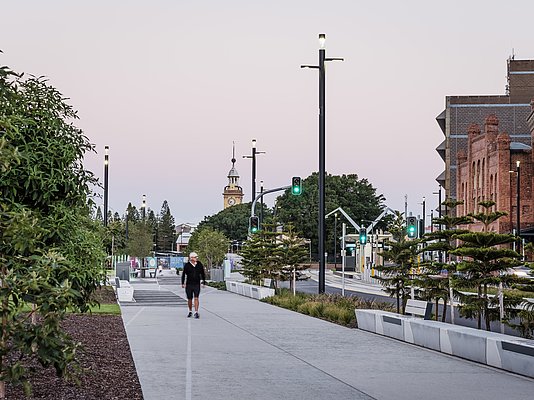 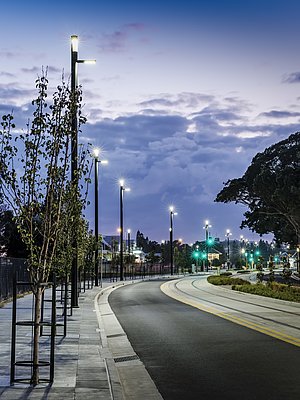 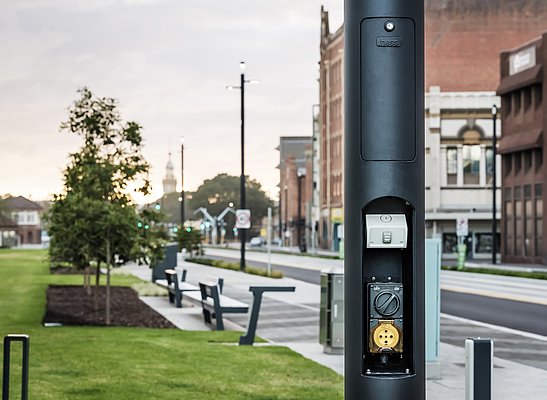 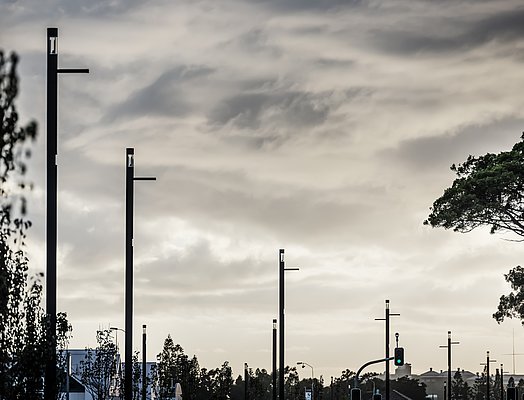 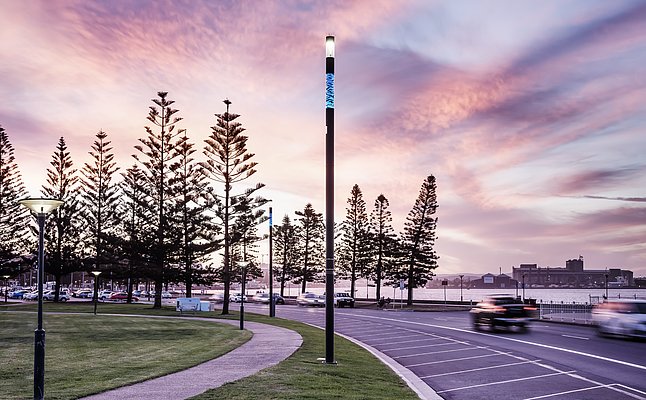 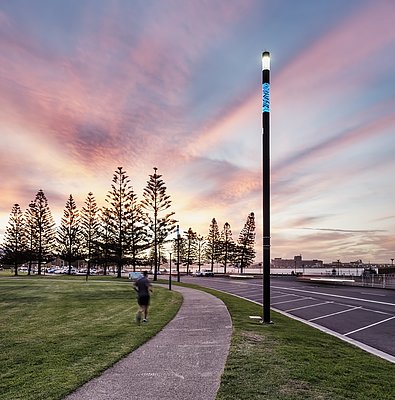 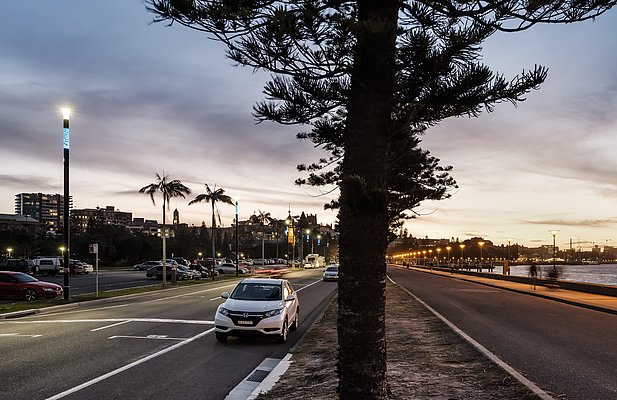 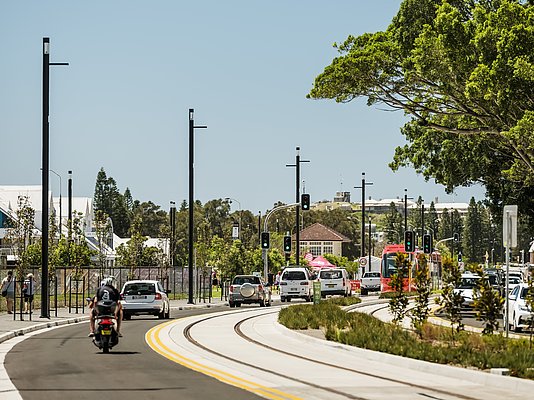 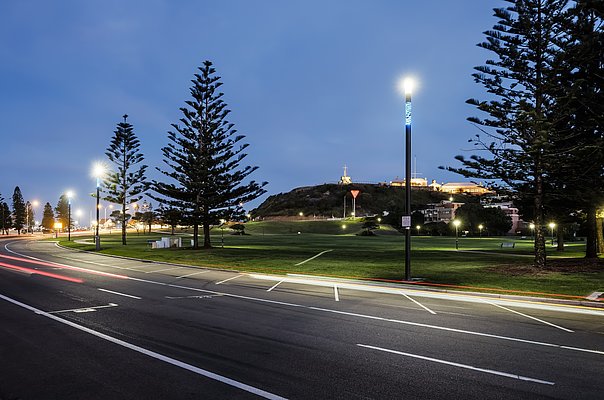 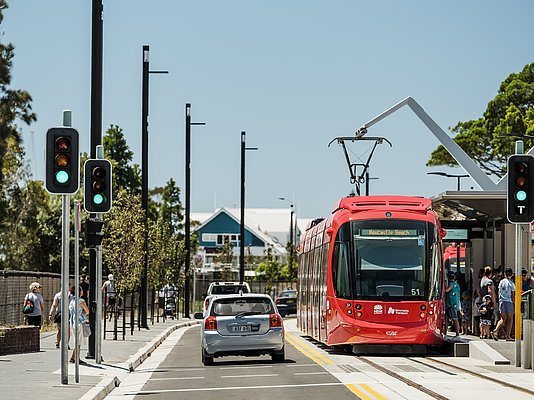 In 2017, the city launched a Smart City initiative planned to be implemented over a four year period of time. This initiative had the aim of improving the quality of life, sustainability and economic diversity.

Part of this initiative is an intelligent and versatile public lighting system which, in addition to its functional and energy-saving nature, includes other smart systems such as public WLAN, cameras, loudspeakers, spotlight technology, illuminated decorative elements and sensors.

So far, this unique lighting concept, for the entire city centre, has been implemented using around 250 CITY ELEMENTS 230 from Hess. The illuminating columns are not only sophisticated in their minimalist and modern design, but also meet the different lighting requirements of the strict Australian-New Zealand standard.

Thanks to their modularity and pole diameter of 230mm, the integration of different intelligent functions is possible without any problems.

All these devices are perfectly integrated into the light column and do not impair the cityscape – on the contrary, they create a uniform appearance.

Both streets lead through the city centre and end at the Tramway Reserve and at Pacific Park, respectively. Both parks have playgrounds, barbecue areas and host festivals, markets and concerts, inviting visitors to come and linger.

If you drive along Wharf Road, you can catch a glimpse of the Queens Wharf Ferry Terminal, the restaurants and the green areas. Furthermore, the Wharf Road is part of the "Newcastle 500", an annual motorsport event in which the racing teams compete in so-called "supercars".

The CITY ELEMENTS 230 from Hess were ready for action just in time for the first race ever in 2017 and the rush of visitors that the event attracted.

The 50 Watt LEDs with a light colour of 4000K in the terminating elements, meet the lighting requirements on all three streets.

While variable luminaire heights of up to 10 metres were chosen for Scott Street and Wharf Road, the CITY ELEMENTS have a uniform height of 11 metres along the entire length of Hunter Street.

A further objective was to homogeneously illuminate the car park on Wharf Road from above, in order to provide a high sense of security.

The planners met this requirement with additional 27 Watt spotlights in some of the intermediate elements.

The former rail infrastructure, old covered pedestrian bridges and the exposed area on Wharf Road, which once separated the city centre from the harbour, have been transformed into an attractive 8,000m² public green area: Market Street Lawn. This is considered to be the junction of Market Street and Scott Street and thereby creates a connection between the Central Business District (CBD) and the harbour – a combination of North and South.

The green area not only invites visitors to relax and unwind with comfortable seating and playspace water feature, It also serves as a central event area for small to medium-sized events and activities.

In order to stage the area in the evening and night hours, the installation of GoBo projectors (integrated in the column) is planned. With these GoBo projectors, texts, graphics, brand logos and patterns can be displayed on the surface and impressively animated.

While the former rail infrastructure was transformed into the new Market Street Lawn, Hunter Street and Scott Street have become part of the new Light Rail network.

The lanes of the two roads are now separated by rail traffic – resulting in a very wide area that needs to be illuminated. The requirement to guarantee the necessary brightness on the road was therefore challenging.

Different versions of the illuminating columns were chosen for the lighting.

Firstly, the CITY ELEMENTS 230 along Hunter Street and Scott Street were fitted with an additional 80 watt DALVIK S luminaire head.

Secondly, a further offset luminaire head with 28 watts was installed on some of the CITY ELEMENTS 230 on the footpath that runs parallel to Scott Street.

The additional inclusion of DALVIK S luminaire heads makes it possible to significantly expand the lighting functions – and further increases the application range of the already extremely versatile CITY ELEMENTS.

And during the day, the illuminating columns, finished in the elegant colour "Mica Black", appear very reduced and reserved despite their stately heights.

In order to create real added value for citizens and visitors, multifunctional elements were integrated into all CITY ELEMENTS 230.

The comprehensive, public WLAN is integrated in an almost invisible way – only a small antenna in the terminating element discreetly indicates the presence of WLAN.

In a large part of the CITY ELEMENTS, the cameras integrated in the intermediate elements ensure greater security. This is particularly important at the previously mentioned major event, the "Newcastle 500" race, as well as at other events on Market Street Lawn.

Loudspeakers integrated into the luminaires along Wharf Road also ensure that spectators and guests can be informed and entertained during the events by means of announcements and music.

The 150 watt JBL column loudspeakers, installed in the basic elements, guarantee great sound thanks to their excellent quality.

In order to be prepared for more extensive multifunctional requirements, some illuminating columns are already equipped with the corresponding devices, which, among other things, enable the integration of a wide variety of sensors.

Due to the prestigious location of Wharf Road in the city centre, a very special decorative element was chosen in addition to the lighting techniques and multifunctional elements described above: An illuminated 360° element that reflects a pattern of softly breaking waves.

In the evening and night hours, this element – which corresponding to the colour synonym of water – shines blue and embodies the character of Newcastle as a harbour city. An ideal challenge for the lighting specialist Hess.

With the smart lighting concept as part of the Smart City strategy, Newcastle is considered to be a pioneering city in Australia, because the new lighting is the largest, integrated, multifunctional smart luminaire installation anywhere "Down Under".

This year, the city was chosen as "Smart City of the Year" at the national "Smart Cities 2019 Conference". Newcastle is thus following up on winning the "Smart Cities Strategy Award" in 2018.

Further smart luminaires are planned for the next few years in the centre of Newcastle. With additional multifunctional applications, the aim is to make the city even more efficient, for example in order to be able to analyse traffic by collecting data. But one thing is already clear: The quality of life and inviting atmosphere will continue to be improved for residents and visitors thanks to the Smart City Initiative.

We thank our clients for their trust in Hess – as a worldwide partner for smart solutions. Today and in the future.