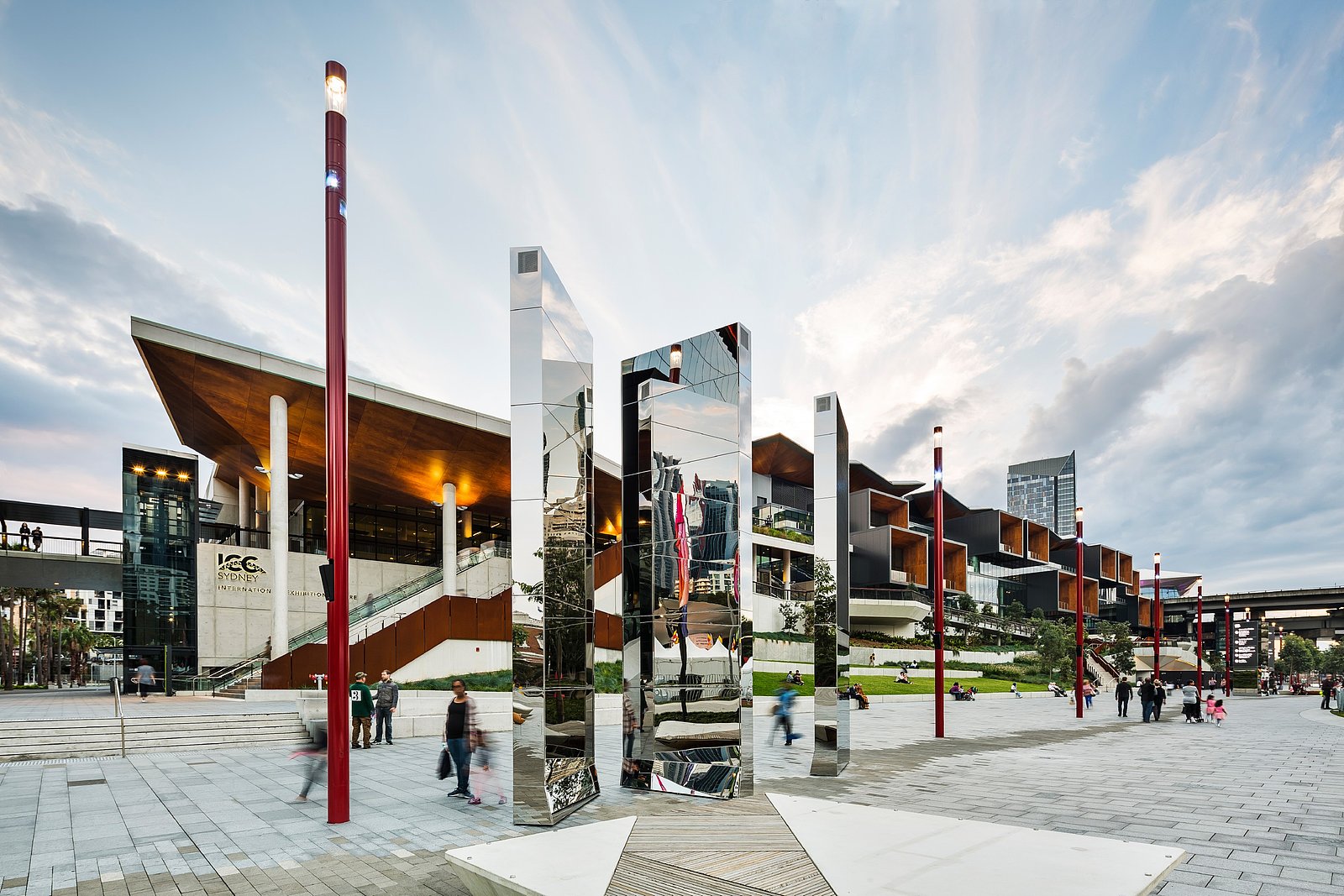 Darling Harbour, a cultural and recreational district in Sydney, is just a stone’s throw from the metropolitan city centre and offers a variety of leisure and Entertainment facilities, including hotels, restaurants, cafés, shopping centres, museums and attractive open spaces.

With the newly erected convention and Event centre ICC along Darling Harbour Boulevard, the district is set to become a world-class event venue and the cultural heart of Sydney.

Local benchmarks are being set with the largest multifunctional and smart outdoor lighting system in Australia – with specially manufactured and multifunctional CITY ELEMENTS 230 illuminating columns from Hess. 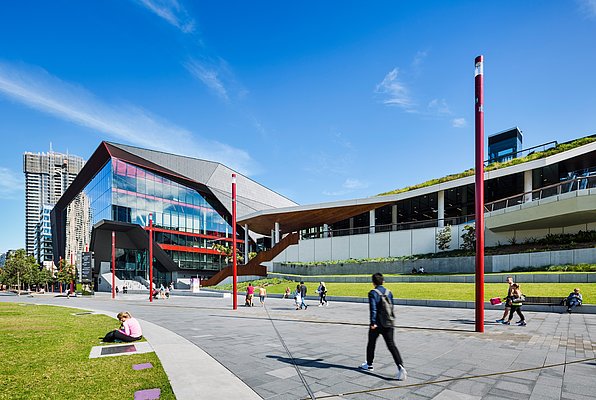 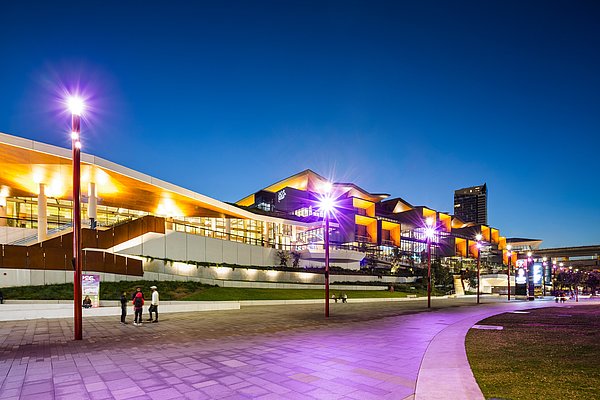 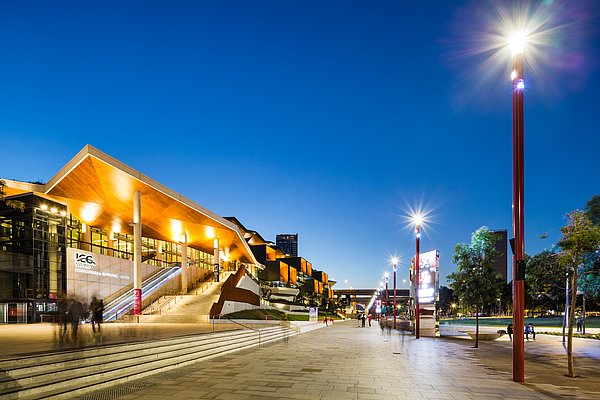 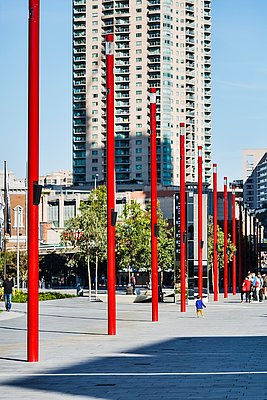 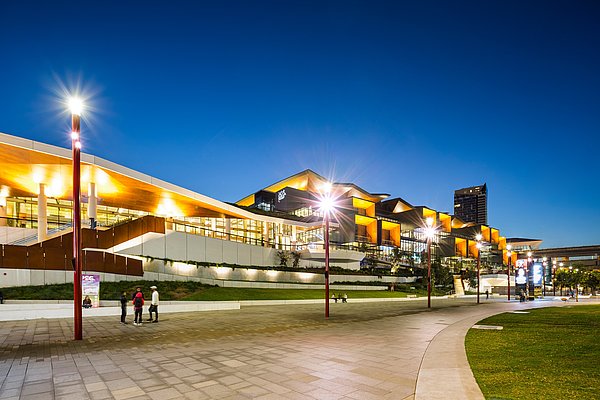 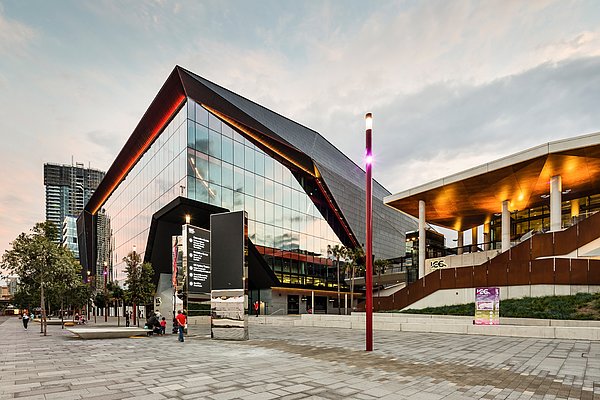 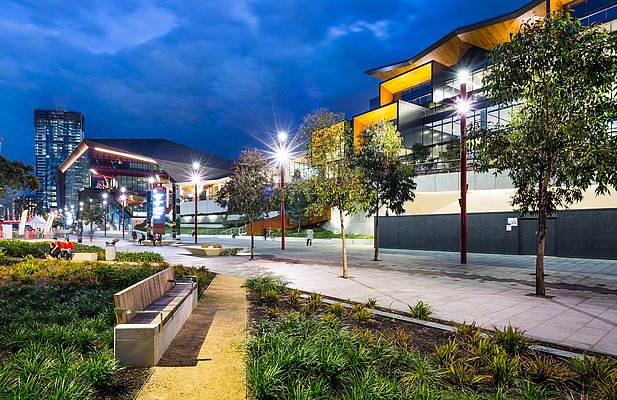 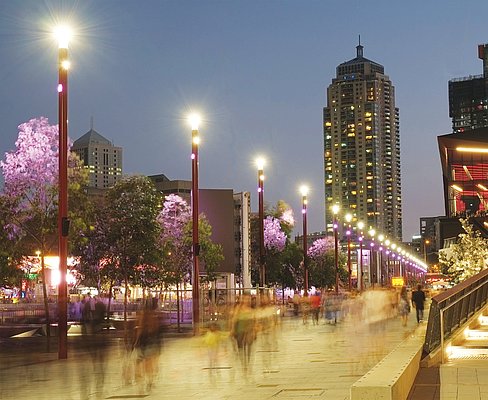 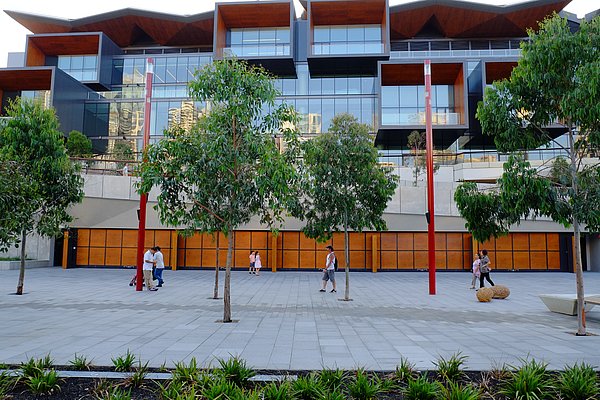 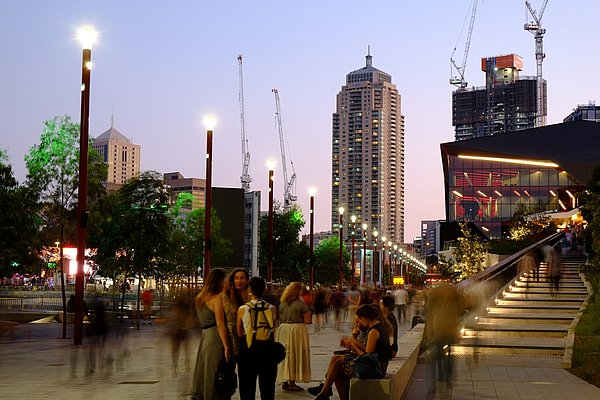 The vibrant Darling Harbour district offers everything you need for an entertaining time out in the Sydney metropolis: a spectacular waterfront location, numerous attractions and a diverse cultural and event program.

The erstwhile commercial port, named after former governor Ralph Darling, has developed since the 1980s into the city’s largest recreational area with fantastic opportunities for fun and leisure.

Revitalisation of the waterfront

Today Darling Harbour is experiencing the most exciting revitalisation in the history of the waterfront. At the end of 2016, the International Convention Centre Sydney (ICC) was opened as part of the “Darling Harbour Live” project on a 20-hectare site on Cockle Bay. It is a prestigious and state-of-theart convention, exhibition and Entertainment centre with much greater capacities for a wide variety of events than the previous 30-year-old Sydney Convention and Exhibition Centre it is replacing.

The complex consists of three adjacent buildings: In the north a five-storey convention centre, in the middle Australia’s largest trade fair and exhibition area (ICC Sydney Exhibition Centre) with 35,000 square meters of exhibition space distributed over seven halls and a gallery, and in the south the entertainment theatre (ICC Sydney Theatre) with seating for 8000 visitors.

The newly constructed Darling Harbour Boulevard – a 450-meter-long and 20-meter-wide pedestrian esplanade – serves as a connecting axis that is embedded in newly created open spaces. They invite you to linger with water features, sculptures, seating and a magnificent view of the Sydney skyline.

The attractive convention district links the centre with the harbour on the outskirts of the city and is intended to revitalise Darling Harbour economically and culturally.

“This district will reflect the dynamism of Sydney’s cityscape and redefine Darling Harbour,” reports project manager Richard Breslin from the architectural office Populous, which developed the design concept for the convention centre on behalf of the Darling Harbour Live Consortium in collaboration with the planning offices Hassell and Lendlease.

Improvements to the landscape and smart lighting

Further concerns of the participating Partners were making improvements to the park-like landscape in a sensitive manner as well as adopting a smart and multifunctional lighting concept in order to make the outdoor space more pleasant by day and night.

“With the landmark convention centre, the boundaries of the building are set back so that the landscape becomes part of the building. The rooms look out upon the park, terraces function as open-air meeting rooms, and a huge 5000-square-meter area on the roof serves as a platform for large events. It is a fusion of architecture and landscape, so to speak, of inside and outside,” says project manager Richard Breslin, explaining the essential design criteria for the ICC.

The project-specific lighting solution, with its multifunctional illuminating columns CITY ELEMENTS 230 from Hess, perfectly integrates itself into this sophisticated philosophy.

Illumination, effect lighting and multifunctionality combined in one column

“The lighting on Darling Harbour Boulevard is unique. It is currently the largest multifunctional and smart lighting Installation in Australia,” adds Dr. Walter Wendel from the Australian Hess subsidiary Form+Light, which was involved in the lighting concept.

In addition to the uniform lighting of Darling Harbour Boulevard and the adjacent Darling Square according to the Australian P7 standard for pedestrian zones, the planners wanted to integrate additional features, including coloured effect lighting as well as loudspeakers, cameras and power supply options, into a minimalist and attractive lighting structure.

With its individual elements that can be combined and equipped as desired, the multifunctional HESS illuminating column CITY ELEMENTS with a diameter of 230mm proved to be the perfect solution for all requirements. The CITY ELEMENTS, which in this case are 9 meters high, were designed specifically for Darling Harbour with specially modified elements.

“The CITY ELEMENTS from Hess impressed us both aesthetically and in terms of function. No other 9-meter-high illuminating column provides all of These features,” says Dr. Walter Wendel.

“The lighting on Darling Harbour Boulevard is unique. It is currently the largest multifunctional and smart lighting Installation in Australia”

Perfect light for every requirement

A total of 30 specially configured CITY ELEMENTS 230 were installed along Darling Harbour Boulevard and another 11 CITY ELEMENTS 230 on Darling Square. The luminaires have a largely identical design at both locations: In the top element, two LEVO LED modules in the light colour 4000K ensure homogeneous illumination of the pedestrian areas.

Under them are two intermediate elements with laterally offset light outlets, each equipped with an RGBW spotlight of type Jade 16 by GRIVEN, the sister company of Hess specialised in architectural lighting. These provide decorative accentuation of the trees at the edge of the pedestrian zone.

In order to stage different lighting scenes including dynamic colour change and dimming, all light elements are connected with a DMX controller.

The lacquer coating and thus the appearance of the luminaires is adapted to the climatic conditions and to the special architectural features of the ICC.

For example, all CITY ELEMENTS are equipped with a paint finish resistant to maritime air in the distinctive hue “Hunter Red” (RAL 3011), which is repeated on the façade of the ICC Theatre. The illuminating columns are thus in complete harmony with the façade.

Maritime district continues to be revitalised

The revitalisation of the port area in DarlingHarbour is still far from being complete after the opening of the modern Conference Centre.

Additional new construction Projects will get into the starting blocks by 2020.These include the “Ribbon Project”; a new destination hotel, office, retail and entertainment district in thei mmediate vicinity of the ICC convention centre. For Darling Harbour, the best prerequisites for becoming a hotspot in terms of lifestyle, culture and entertainment ...

CITY ELEMENTS from Hess is a lighting system that is suitable for all requirements in the city as well as in front of representative and high-profile buildings.

These modular illuminating columns are suitable for almost all lighting tasks and fit perfectly with the existing urban surroundings as well as a wide array of architectural requirements thanks to their individually combinable base, intermediate and top elements, two different diameters, various lighting technologies and variable heights of up to 9 meters and above.

In addition to the lighting tasks such as square, façade, street and effect lighting, CITY ELEMENTS can be used to implement additional functions and supply Solutions for a variety of urban and usage-related requirements.

There are practically no limits to the requirements they can meet. Whether a camera for security-relevant areas, a loudspeaker for announcements and entertainment, WLAN for unlimited connectivity or projections for attractive displays – the possibilities are endless.